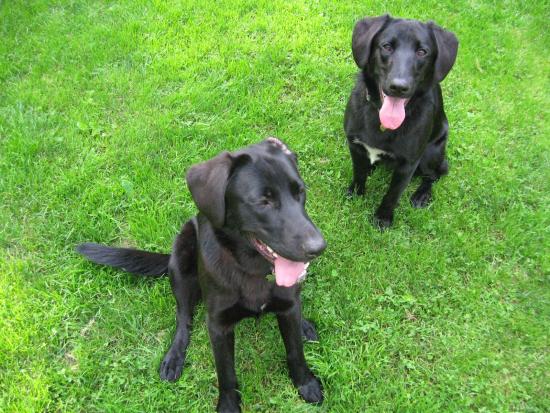 Today Lettie and Lu celebrate their first birthday. My gift to them is the date itself. I have used it every year since 1953 and quite frankly both July 3 and I were looking a might threadbare. Once close allies, we had all but outgrown our use for one another. July 3 reminds me of my mortality and I remind everyone else of the dangers of celebrating the date too many times. Ssince the girls were nine weeks old when we got them, their birthday was right around mine anyway so they can have it.

July 3 is a really good day and now that it's theirs, it seems revitalized to me. They are young, joyous and amazed by life. They awake each day excited and roaring to go. In short they are perfect celebrants for such an auspicious day. Despite the fact that we have moved past our need for a close association with one another, I will always have a real fondness for July 3. As a kid I soon learned it was almost perfectly situated. 27 weeks since Christmas, 25 weeks until Christmas. School was out and summer was new so I always had beautiful full days to exploit. And in my hometown of Skaneateles, NY the lake is lit with safety flares sold by the Boy Scouts at 9pm every July 3. When I was very young, I was convinced it was in my honor.

As I got older, it was a great day for a birthday because everyone has July 4th off. The one downside to this is waking up with a hangover on a day noted for fireworks. But it's a holiday and so nobody begrudges you a Bloody Mary and its soothing side effects.

Politically being Born on the Third of July meant I could joke that I was always a step ahead of this country.

All in all, I have had a fine time for myself on this day and now I do not care much about the commercial benefits of holidays and birthdays, the best thing I can do is give it to the two latest loves of my life, Lettie and Lu. I owe them both-- big time.

Lettie and Lu have seen Karen and I through the very sad days following the death of our beloved boy, Lloyd the Dog. I still get choked up over him a few times a day. If you had known him you'd wonder why the breakdowns don't come more often. He had so intertwined his life with ours that there is always something that calls him to mind. He never needs to be called to heart because he resides there. Karen has had a very, very tough time without her boy. If one of us mentions Lloyd, the other gasps a reply and then we just sit quietly as the mist rolls in. Being dogs, Lettie and Lu have taken us as we are and love the hell out of us despite the fact that we seem at times to be very sad people. They make me laugh when they play together, dogfighting on the dead sprint, knocking one another over and bouncing back up, never losing a step in the process. They compete and contest each other for everything but even when they snarl, they are never close to real anger. When I demand they stop going after one another, they immediately calm down and turn and smile at me as if I am the one behaving like a nut. Then they look at each other as if to say, "What's this guy's problem?"

They are learning to follow basic rules. When we put their food down for them, they know they have to wait until we give them the OK. Lu just looks as pleasant as she can in hopes of speeding the process along. Lettie always looks up at you, with her head half-twisted in sincere anticipation. She is such a sweetheart that you always feel guilty for having imposed such dinnertime decorum.

Even when they're nuisances, they're nuisances without a shred of malice in their gigantic hearts. I have never had a dog who was a digger -- now I have two. In the rocky, hardened soil around here they can displace dirt at a rate of about eight inches per minute. If we weren't vigilant about filling up their excavations, the yard would look like it had been strip-mined.

Lettie hangs the closest to us, which is good because she can always find her sister, "It's Always" Lu. It was Lu who got nailed by the porcupine. Lu first engaged the bear. Lu climbed and knocked down the woodpile. Lu brought home the dead muskrat (that I then had to take on its last ride to a remote location miles from here, where its um, muskiness could no longer sing a siren song to the girls.) Lu got her head stuck in the plastic jar when she was a puppy. Just yesterday she learned to operate the electric window in Karen's car. They went through several rounds of Karen putting up the window, and Lu putting it back down again until Lu finally trained Karen to use the child lock on the windows. Lu is currently taking Karen to obedience classes. Lettie is next. Lately they have finally both gotten interested in playing ball with me. This was a big breakthrough, a boy needs someone with whom to toss the ball around. Lloyd was a canine Willie Mays, except Willie had a better arm. The girls now would rather chase down tennis balls than many of their other favorite activities. They will get a few cans of fresh yellow orbs today. Lu is a lot like Lloyd, very independent and resourceful. But Lloyd was more patient. He would sit by the door when he wanted to go out. If you missed that cue, he'd lightly tap his paw on the door. If that didn't work, he'd give you a little rolling moan. Only after all that failed would he bark. Lu's barks immediately  to tell you, "Step to it, I want some service!" To let steam off while she waits for us to comply with her wishes she springs up and down. From the sitting position Lu can bounce so high that her head reaches a point above the sliding glass door. It's always a temptation to ignore her, if only to see her perform this remarkable feat of athleticism.

Lettie needs us and isn't ashamed to ask for help... starting most days around 5am. She has learned that I am slightly easier to rouse than Karen so  usually I'm the initial recipient of her morning slam dance. This is preferable to those days when she decides to attempt mouth-to-mouth resuscitation. It always works!) Nothing like starting the day off with a nice French kiss from a puppy. I usually get up in an attempt to draw fire from Karen but by this point Lu has generally decided to warn her that she is missing the beginning of the day. Even when I manage to feed and walk them without disturbing Karen, as soon as they come back in the house they make a beeline to her bedside because she's already been left out of so much!