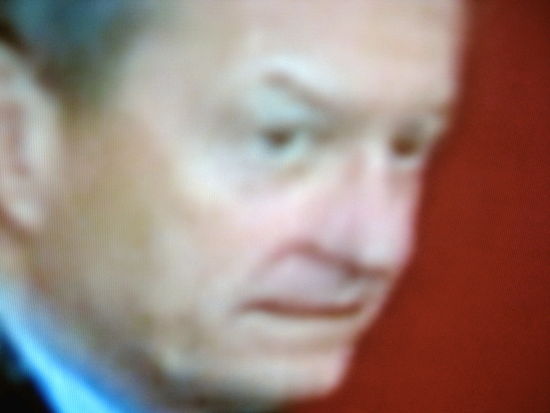 Sen. Max Baucus (Influence redistributionist - Mt),  is the most bought-and-paid-for of scores of legislators who've been bought-and-paid-for by deep-pocketed, shallow-souled medical racketeers. This money-grubbing goon squad has spent the year dispensing a mammoth and McCarthyistic dose of disinformation from corporate journo-shills cluttering up a foreboding yet worthless media skyline. The rest of the medical mega-dough has been put into the aforementioned high-yield legislators.

The propaganda and fiscal arm-twisting campaign is meant to keep our allegedly exceptional nation from joining the rest of the world in acknowledging that single-payer health care is the only answer for those who prefer civilization. Unfortunately, due to the river of green that's flowed under Washington's table, single-payer is all but off it. There are still some peeps about a "vibrant public option" but what we really need is to kill the private one before it kills any more of us.

According to the moola-minting med community, single-payer is unacceptable because it would leave health care in the hands of the same people who have never missed a scheduled mail delivery to me in my 56 years on Earth. The single-payer smear campaign warns of the risk posed by such an unproven bureaucracy. Yeah, no sense risking it when we can instead leave life and death in the hands of those who will literally let your mother expire if her demise means an extra nickel in their greasy little paws.

This week the health care cabal acted out a professional wrestling morality play by turning on their money-tender from Montana with a two-day offensive slagging the Senator's thoroughly compromised compromise plan for national health care reform. The offensive cautioned against the Baucus scheme that was about to be put before the Senate FinanceD Committee. The insurance thugs last minute warnings were as ham-handed (OK, lamb-handed) as an Osama bin Laden election eve denunciation of George W. Bush. (Oh please, don't re-elect the bait-takingest moron in the history of American dunces!) Baucus's plan would make the purchase of health insurance mandatory for all Americans. Concerned that a program designed to force each citizen to purchase their oft useless product might not make it out of committee, the racketeers put on their villain garb to verbally body-slam the Big Sky Bagman's plan. Mind you, these hated criminals know better than to appear in public, except when they want to exploit America's inability to fathom reverse psychology. The insurance peddlers scripted remarks cautioned us that Max's bill could result in higher premium prices. There's little doubt that this increased-cost warning will soon be looked upon as prescient. But getting credit for its ability to foretell its own price-fixing is a paltry co-pay compared to the billions of extra bucks Baucus' mandatory insurance plan will steam-shovel the sticky hands people's way.

Of course Baucus's effort to further socialize the high cost of health insurance profiteering passed the committee he chairs. Maximum Max is being celebrated by many of the same Osama-spooked rubes who voted for Bush in 2004 and are now afflicted with the intense pain in the wallet that is a never-covered condition for American health insurance consumers. These suckers are joined by a slew of Obama acolytes who will look upon even impotent reform as a large victory for their recently hapless hero. As a result, Chairman Max has gained esteem by fighting for our right to buy into plans much more likely to impoverish us than keep us in the pink. On the bright side, this redressing of our grievances in reform drag will most assuredly keep Baucus's Montana goldmine boldly in the black. Hey, it's a start!

Sadly it's a start right back down the awful road that brought 47 million of us into a health care-less state. It has also brought millions and millions more the next worse thing -- insurance that almost never provides proper health care. As countless sane people have said until they went untreated for being blue in the face: we need health care not health insurance.

My friend Barbara Staley of Seattle commented on the farce that is health insurance when she wrote NPR about it last summer, asserting:


The discussion revolves around a faulty premise: that health care is the same thing as health insurance. It is not. Health care is a basic human right. Health insurance is a profit-driven commodity that seeks gain through delaying and denying care. In a rational, civil society, health care should be a given. It should not depend on an individual's ability to do savvy comparison shopping for a product that seeks to profit by denying the very service it purports to provide.

You said it, Barbara! If only anyone would listen. In the meantime, the insurers' shrill protestations over Baucus's insurance imposition will be muffled by the cascade of cash about to flutter down upon the toniest neighborhood in the brier patch.