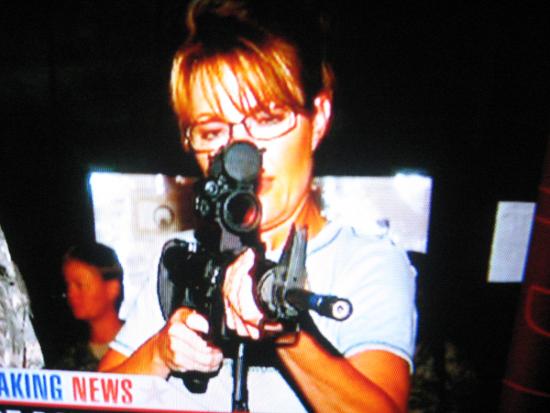 Sarah Palin, the choice of the matriarchy?

Alaska used to bring to mind the term "Seward's Folly." Today John McCain took Lincoln's right-hand man off the hook by selecting Alaska's neophyte governor, Sarah Palin, (rhymes with 'failin' and depending on how the Ted Stevens corruption scandal unwraps, 'jailin'' may not be far behind) as his running mate.

McCain, who has spent the past several months selling the idea that we need an experienced leader as president, has just made an assistant stock clerk second-in-line to the CEO. And face the facts, if this particular CEO wanted to buy life insurance, he'd be put in the assigned risk pool. Fortunately Whispering Johnny doesn't need to worry about leaving his wife financially secure because that's how he found her.

When McCain's father and grandfather were his age, they were already dead. As Casey Stengel would say, you could look it up. McCain's only connection to the environment these days comes from the fact that he's being stalked by the term "natural causes" yet he's has chosen a political neophyte/sleazebag prodigy as the person who could easily be president six months from today. It could be time for Barack Obama to borrow Hillary Clinton's fear-mongering machine.

It's 3 am and John McCain's left arm is feeling numb, just a few blocks away Sarah Palin is awake rehearsing her testimony for a deposition concerning her involvement in a plot to sell the drilling rights to her oily political cronies without informing them of the transaction. She has been advised by her attorney to "never answer the phone". If this a scene you want to see play out, America by all means vote for McCain/Palin on November Fourth. And so a woman who makes Hay Bailey Hutchison look like Sojourner Truth is the #2 choice for the R's. In retrospect McCain may decide that it would have been better to let Obama have another few news cycles in the spotlight rather than to have made this move.

And women are supposed to be excited by the selection of this antichoice, pro-war lapdog of the patriarchy?

In the  struggle between Mother Earth and Fatherland  we know which team Palin plays for.

And we're supposed to think McCain has reasserted himself as a maverick because he allowed Karl Rove to shove this reactionary spear-carrier for the Religious Right down his throat? Good luck on that one.

McCain's a Maverick all right-- a Ford Maverick. One of the biggest lemons anyone ever attempted to foist on the American people.

She reminds McCain a lot of himself when he was her age. Had Palin been around back then McCain's convinced, she'd have made it the Keating Six.

Palin better hope global warming isn't for real because when the Alaskan ice melts an awful lot of Republican political skeletons are going to start turning up.

And she's calling herself a reformer but there are clouds hanging over her. I'd bet you anything something embarrassing will surface before the election. She's like Mitt Romney and the Salt Lake Olympics. She's not in charge of Alaska to reform it, she's in charge to limit the damage that is headed for all sorts of connected cronies who have been exposed as crooks. Can you name anyone who was held accountable for all the sleaze out in Salt Lake? Of course not. Romney did his job.