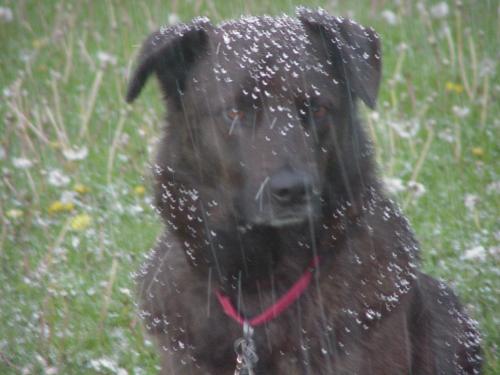 This was from a snowy late spring day. Lloyd loved winter but when he thought it was returning after just a few weeks, his beautiful, incredibly expressive brown eyes couldn't help but comment.

This is a hard morning. Karen has gotten up and gone to work. I rose with her. We sobbed together, our new morning ritual, then we gathered ourselves to make our way into a new and awfully empty day and week. I hope Karen's work provides her with distraction and purpose but I know whatever she accomplishes will be done despite an all-encompassing grief. What will be hardest for her is to realize that she needn't call several times to ask us, 'how you guys are doing?' Now she will just phone to see how I'm holding up.

I am truly alone here, facing my first workday without my pal. 'Workday' is stretching it. Lloyd and I played hooky together for the past several years. Well 'hooky' is stretching it, too. I was very productive with Lloyd around but he was so much fun that just being with him felt like hooky. Much of the time I'd write and he'd snooze nearby but intermittently we'd take walks and play. If I had yard work to do, he'd come outside and supervise the operation. Occasionally he'd remind me that the most important task for me was to try to wrest the tennis ball from him that he presented at my feet and then would snatch away when I reached for it. Eventually I'd pry the ball from him but he never felt defeated because all it meant was the next phase of our game had begun. So I'd throw or hit the ball and he'd sprint to catch it in midair or on the first bounce, often during remarkably athletic helicopter leaps, accented by perfect landings. Then he'd come back towards me with the ball but somewhere along the line, he'd drop it and make me reach for another. Balls scattered around the yard were his booty, the bushel basket on the porch that overflowed with yellow orbs were community property. No ball was ever as interesting to Lloyd as the one I held. He made gallant attempts to catch every new projectile. On those rare occasions when he failed, he emitted not an ounce of disappointment, just gleeful anticipation for the next challenge. He had a perfect attitude.

Lloyd and I played all the time. Although I set clear safety boundaries for him, he knew that anything went within those borders. We never went long without frolicking, just a couple of kids with the keys to the kingdom.

I wish I was a songwriter because songwriters can make beauty of pain and find strength in the most fragile of things. And that's what I need to do now. I need to write something transcendently meaningful about my friend Lloyd. I wish I could write something with music that is as beautiful as he was handsome and dear. Something with lyrics that describe just the right details of a magnificent life. Details that find their ways into other lives and become just as important in new homes and hearts. Something of timeless significance, just like Lloyd.