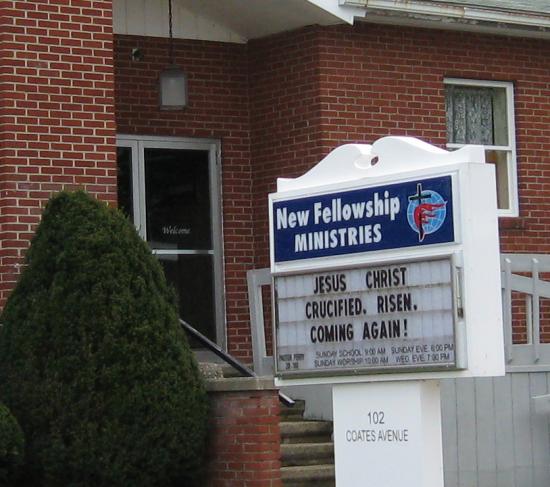 Oh sure the last several decades have been kind of rough in much of rural Pennylvania but that doesn't mean its people have given up. They are more confident than ever that a savior's on the way... in one form or another... No matter where you look in rural Pa., you can see why Senator Clinton can't help but enthuse about the hopefulness and pride that swells in every town, village and hamlet of the state. Architectural masterpieces are everywhere. A specialty of the area is an antiqued paint, that goes on dry and in chips and is made with a secret wood repellent. And when it comes to painting, throw out your color charts because rural Pennsylvanians use an array of hues not found in nature or in any hardware stores looking to remain on the right side of the Better Business Bureau.

Speaking of business, it's primed for a keystone comeback because opportunities are everywhere! Oh sure some of the big national chains are already on board but there are plenty of primo storefronts just begging for someone with an entrepreneurial spirit and a line of credit in China to come and turn the key! But seriously --  no one could view most of rural Pennsylvania -- or for that matter most of upstate NY -- and not see the despair and doom that is everywhere. Wherever you look there are indications of surrender to cruel economic realities. You see home improvement projects, half-done, leaving the dwellings more exposed to nature and decay than they were when people tried to put some sweat equity into them. Folks just run out of money and hope. You see empty commercial districts, closed factories and people time has forgotten. If they aren't bitter, they are either drunk or drinking deeply of religious dogma so as to distract them from the grim reality that confronts them every day. Being human, these people don't want to hear that they live somewhere that is rotting and forgotten. So cynical politicians will come along and exploit the victims of the American economic calamity by indicting anyone who dares to point out that unjust and horrid circumstances have led to tangible tragedies. Schools become nothing more than a good way to keep track of tomorrow's cannon fodder. Children who are inquisitive are considered disruptive to a process of indoctrination that makes the rest responsive to pleas to ignorance in drag as calls to duty. Throughout the populace, fear of the rest of the world grows and people become backward and cut off. The situation is no different than it is in the cities except that the insidious impact is spread over thousands of acres rather than hundreds of blocks.

When a candidate even begins to acknowledge and source this calamitous state of affairs, he is punished as if he himself brought this hellish circumstance about-- as if mentioning this nightmare somehow brought it on. Well we are screwed forever unless we all open our eyes and look at the grim reality that ambitious and shameless politicians like Hillary Clinton are so happy to exploit. If she was the co-president she wants us to think she was, then where the fuck was she for the people of Pennsylvania during her eight years in the White House? And where has she been for the people of upstate New York during her seven years as our senator?

I have been saying for years that what this country needs is a Renewed Deal (but never with the eloquence of our dear friend Howard Zinn.) Do we have to wait until the entire nation has sunk to the level of economic collapse that has long beset much of rural America and so many of our rust-belt cities before we reject the cowardice and heartlessness that has allowed us to ignore the agony that has slowly debilitated so much of this nation?

We can no longer afford to squander our wealth on the childish and patriarchal madness of deficit-spending this land into alleged military super power status. For Christ's sake, if we have learned nothing else over the past forty years, we should have learned that our vast military might is just about useless. We have lost war after war (one way or another) and made new enemies in every corner of the globe. We have become the bully with a glass jaw and everyone knows it. We need to be humble enough to assess our circumstances and then demand that our government finally live up to the rhetoric it bandies about concerning inalienable rights. We have no right to inflict the horrors of war upon innocents all over the globe but we have a responsibility to use all that we do have to ease suffering and bring hope to our nation and world.

I have little faith that any of the presidential candidates has the courage to truly help facilitate an age of peace and reason. I do have faith that they are easy enough to scare into bending to the will of the electorate. That is why it is essential that we respond to penny ante patriots with united and informed resolve - a resolve that demands we courageously open our eyes and consider the real condition of life on this here planet. Only by looking at the sad surroundings of so many of our fellow humans can we begin to set about rectifying the gross inequities that have brought them to such wretchedness.