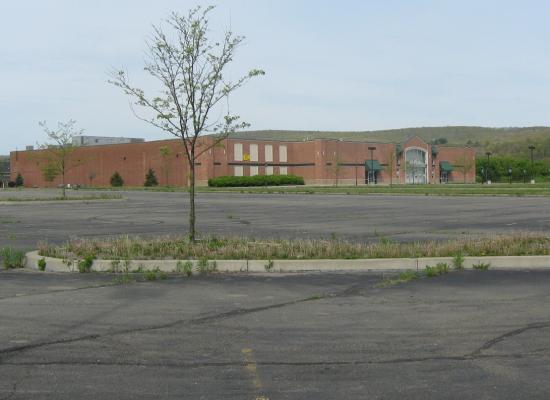 Above is a former P&C supermarket. P&C is a grocery chain that's mostly in upstate New York. It has union employees and its modernized stores are designed to compete with Rochester-based Wegman's. A few years back P&C opened an ultra-modern, full service store in Gang Mills, located near a major wing of Corning Inc., as well as the village of Painted Post and the bedroom community of Erwin. The store opened with much fanfare. Customers liked its deli, takeout foods, seafood dept. and large selection of products at competitive prices. Contributing to the stores traffic was a  K-Mart right next door. But in less than two years, both businesses went belly up. What could have caused the loss of these viable businesses in such a short time?

By the time the P&C opened in Gang Mills, Wal-Mart, already across the street, was expanding its facility to a "super store," that included groceries. Now consumers didn't have to go to P&C and K-Mart because they could do all their shopping in one stop across the street. And the prices were great-- especially because Wal-Mart still had competition in town. K-Mart and P&C

So what do we do with these empty buildings? Who wants to try make a retail go of it across from a monolithic retailer that sells itself as the only store you'll ever need?

Nobody, which is why these perfectly functional buildings sit unoccupied and will continue to sit unoccupied until that day comes when people start to realize that there truly is what has been described as the 'high cost of low prices."

Wal-Mart isn't happy just wiping out the mom & pop retailers. And so now the people in and around Gang Mills eat food picked out for them by an Arkansas retailer rather than a local chain. They eat food that is provided by venders who have been pressured to cut every possible corner and cost to lower their wholesale prices. In many locations, Wal-Mart has become the only game in town for both suppliers and consumers. Wal-Mart provides the perfect example of latter day capitalism because it is not about competition and allowing the market to speak-- it's about the elimination of competition-- except of course among workers. I don't shop at Wal-Mart. I can't believe anyone would feed their families food sold by such a shifty outfit. Wal-Mart is now selling "organic food" -- and this isn't necessarily good news. At a time when everyone is concerned about food safety, the mega-retailer is fighting tougher regulations on imported foods.

Fortunately Wal-Mart hasn't wiped out all of the P&C's, Wegmans and other supermarkets -- but give it time. For now there is good news. Wal-Mart just abandoned plans to wipe out smaller retailers in Bath, NY. The stay of execution for local retailers is probably more of a reflection of the pitiful economy than a result of a lot of hard work by community organizers to keep the monster at bay. But those organizers were forcing Wal-Mart to jump through various hoops and that was costing Wal-Mart money. If it was a close call then the activists tipped the balance.