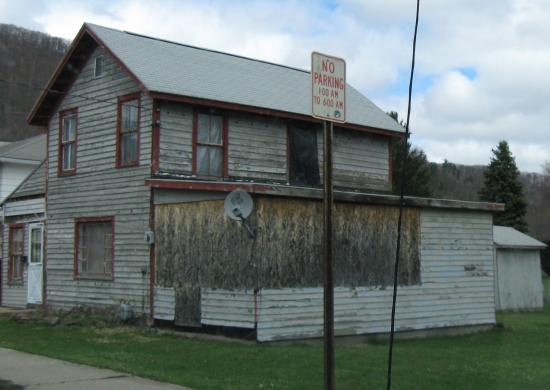 My trip to Pennsylvania last weekend that I documented with prose and photographs got a big response. Thanks to links from several other sites (especially James Wolcott's), the traffic for the two posts and the one follow-up remains robust today. I have heard publicly and privately that the photos made an impact on people. This isn't because I'm an especially adept photographer. It is, I think, because the pictures featured stark evidence of decay and desolation in Pennsylvania. Again and again people mentioned that although my photos were compelling,  similar scenes of our crumbling nation could be found not far from where they live, work and travel.  I know this to be true but there are those who would still like to pretend that things are basically fine in our nation. In their reticence to face reality lies an opportunity for us to do something positive by documenting the real circumstances of our nation. It's time for the digital revolution to live up to its name. If you have a digital camera (or a traditional camera and the means to convert your photos into digital files) please get out and start snapping shots of the America we rarely see depicted elsewhere. The closed factories, the abandoned business districts, the substandard housing and environmentally insulted land, air and water. How about some pix of abandoned malls. Perhaps you have some old photos that could show before and after in your town. Maybe you could take pictures of an empty Main Street and then contrast them with the new superstore conveniently located where the city limits meet the edge of oblivion. How about pictures of the growing lines at soup kitchens, food banks, homeless shelters and health clinics? Well you get the idea. And there's nothing new about it. Some of the most amazing pictures I've ever seen, documented the Depression and were done via WPA/Art grants and government agencies such as the Farm Services Administration I want to steal the WPA/Art idea except it can't be stolen because it was a gift. A gift of the acknowledgment of the humanity of impoverished people. A gift not for the poor but from the poor for all of us. A gift that gave us a chance to see what we ourselves were made of.  We are again at a point when we need to see just how bad we've allowed things to become. We are at a point when the tangible damage of misguided priorities is everywhere, if only we would open our eyes and see it. We need to see all that's been lost because we haven't watching out for one another. We need only look at Depression era photos to see how much worse things can get if we continue to wear blinders.

I bring nothing new or important to this. I'm just suggesting we show enough courage and wisdom to take action to kindle the dwindling flame of compassion. I know that as shocking as poverty and decay is in this country, it's worse in much of the rest of the world. Since charity begins at home, I suggest we start with the United States. It can only help the rest of the world for our nation to realize the true price it pays for its narcissistically deranged desire to dominate the rest of the world. It's left us defenseless to a corporate enemy within that eschews the common good as a cost it does not want to see reflected on the bottom line.

So get out and start snapping photos. I'm in the process of deciding which public photo-sharing site would best serve this effort. If you have any ideas or suggestions, let's hear them! Although I have had this website for a dozen years, I haven't developed much tech aptitude during that period. However, I have every confidence in my readers. I've no doubt that you will lead me through this project by taking it over and helping make it into an significant chronicle of our times.

And I repeat, this is NOT an original idea. If you want to go and do this somewhere else-- great! If you want to tell us all that someone else already is doing this and we should all join that effort, I'm all ears. This isn't about turf or credit, it's about all of us and the entire planet is our turf and we all deserve credit. If you prefer to write me privately about this, it's "b-f-c-r-i-m (minus the dashes) AT the domain you are currently reading. PLEASE DO NOT SEND ME PHOTOS VIA E-MAIL. If you do, they will be deleted from the server before they are downloaded into my "IN" box. I am not set up for massive e-mail files. This is part of the reason we need to find a public home for this project.

So what do you think? It's easy to comment, just click the button below and "prove you're human." And then we can all start clicking shutters to prove our humanity.

Looking forward to your response,

UPDATE: Here's proof of why I need tech geniuses to chime in: I wrote and edited the text for this then I posted the pictures and had some troubles getting them up. (Not really I just needed to refresh my browser but didn't... for an hour) so I went to redo the whole thing and when I did,  accidentally posted a crappy first draft of the text. Now I can't find the final draft so I gave what I posted a quick once-over. I don't want to botch up your work like that so, to put it succinctly: Help!