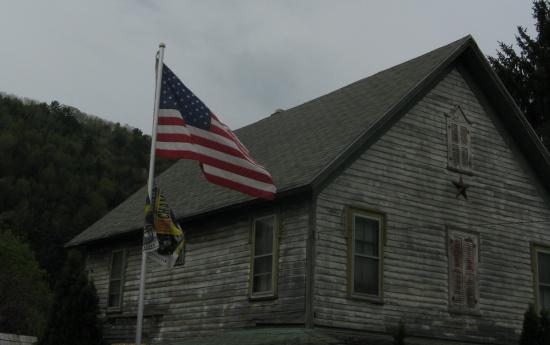 Cut-rate patriotism is everywhere. It's often perfectly sensible/ Why shouldn't some fat cat love this country? If you have it soft, why not celebrate our wonderful system? But why do so many poor folks fly the flag? Is it because they've already given so much for it that they dare not question for what and whom it stands? Have they lost children and/or other family members in any of an endless succession of wars? And so do they then fly it out of respect for these literal human sacrifices the flag has demanded? Have they left parts of themselves behind on far away battlefields and so fly the flag to commemorate their own service?

I am forever wondering why people who have gotten nothing but chewed up and spit out by this country still wear their devotion to it on their sleeves. I'd like to think they fly Old Glory as an ironic indictment but I know that is not the case because I know and have known many of these flag-flying paupers. They are sincere in their patriotism and I have no choice but to respect it.

The more I think about it, the more I assume the military plays a big role in this. The military trains people to demonstrate devotion in an unquestioning fashion. It teaches people that only a traitor would hold his or her country responsible for the oppressive circumstances brought on by an economy rigged for the wealthy. And we ain't no traitors 'round here!

So the flag is unfurled and revered without regard for the perpetual economic degradation it flies above. Many of the Americans fighting in Iraq and Afghanistan dream of returning to homes like those in the accompanying photos. And many of these compromised dwellings are occupied by military veterans (plenty with kids in active service, too). Benefits are hard to come by in this country but flags are cheap and plentiful. It's the one thing they won't take from you but don't go asking for anything else --- or about anything else.

Maybe some of these people know exactly what they are doing by flying the flag. Maybe they intend to make a nuanced gesture. Maybe they fly the flag out of respect for what's been lost but maybe they also knowingly  fly it above the tattered remains of what could have been had this life offered more than a piece of cloth that stands for something as hollow as the pole from which it flaps.