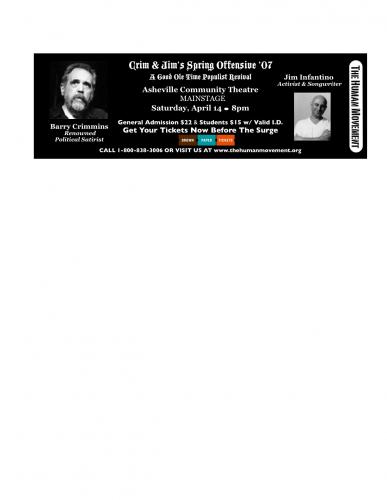 On The Road Again
Hi everybody. I have been quite ill for the past six months, rendering me incapable of public comment on crucial issues of the day, in particular the ongoing battle between fascism and cowardice (the choice we have been blessed with here in the land of the free). Im a known cowardice sympathizer, albeit as a result of my own lifetime addiction to deeply depressing early November cynical resignation. Meanwhile, I have made good use of my idle time training myself to operate a touch screen voting panel while using two hands to hold my nose.

I've been advised by my doctors to avoid toxicity so my C-SPAN viewing is at an all-time low. And I refuse to tune in to listen to Don Anus analyze women's college basketball, much less slurp on the miniscule genitalia of Joe Lieberman, Tim Russert, the politically late Rick Santorum, and the rest of the power elite as they indulge in the guilty pleasure of his throwback racism, sexism and xenophobia. (Although I do endorse his wife's cleaning products because, in my current state, a capful of Mister Clean would be enough to get me a guest shot as a cadaver on CSI Syracuse.)

Still, I can't avoid the crucial issues of the day, like Seedy Gonzales and all the search committees casing banks and rounding up fat cats for the eight dozen or so fine Americans looking to fill George W. Bush's size three and a half cowboy boots. The foot-binding is killing Hillary. Obama seems to have put the chalk into chocolate. But there is friend to us all in Dennis Kucinich and even Edwards seems to offera faint glimmer of hope. As far as the Republicans are concerned: root for Giuliani and hope they hand down the RICO indictments sometime between his nomination and the general election.

My latest near-death experience has amped up my spiritual side. I was so sick I wasn't praying, I was begging and things broke my way. My man St. Francis of Assisi definitely put in a word for a fellow vegetarian pacifist, and the incredibly misappropriated Jesus Christ seems to care for a 53 year-old MIA lamb. And so I seem to have been given yet another reprieve. I also must thank friends who knew how sick I was and put up with me. I love you all more than I could ever capture in words. Most of all I must thank my mother Margaret Hooe, my sister Mary Johanna Smith, Karen' s mother Carol Castglione and her sister and brother-in-law Robin and Brent Gillette, and, most of all, my love Karen Crist and my dog Lloyd for seeing me through a rather ravaging illness and a dreary winter. I'm not the best patient and, amazing as it may seem, I have a tendency to be a tad cranky. Anyway, due to no credit of my own, I'm still here. I assume my survival means I have a few things that still need writing and saying -- I love life, I love people, I love animals, and I really love Spring, a time of rebirth.

It begins for me Thursday, April 12 in Asheville, North Carolina, when I will do a reading at a wonderful book store called Malaprops. Rumor has it Norm Crosby has an interest in the joint. On Friday, I travel to Johnson City, Tennessee, a town where in 2004 I did one of my favorite shows ever. Saturday it's back to Asheville for a concert.

The following week, on Friday, April 22 I will be at Iowa State University for a symposium on the media followed by a concert. I promise accurate show and ticket info no later than Tuesday for all events and I thank my dear friend Dave Saldana for risking his tenure by bringing me in.

I will be appearing in Asheville and Johnson City with my wonderful friend, the brilliant songwriter, fabulous performer and gift to humanity , Jim Infantino. Jim is ultra-busy, but when he learned of my illness he went to great lengths to arrange to do Asheville and Johnson City. He will be appearing solo, which is always great, but if you ever have the opportunity, you have got to catch him with his sensational band, Jim's Big Ego.

The Ashville Show is being produced by a new production company, the Human Movement. They have been remarkably kind, competent, resourceful and un-corporate every step of the way. I am greatly honored to be at their premiere event. Asheville has a tremendous new artistic resource and the idea of working with them makes me want to get and stay healthy for a very long time.

Johnson City is being produced by the single finest organizer I have ever met, my friend Amy Poole. In 2004 she put together a show I did with my old pal A. Whitney Brown on a week's notice. It was one of the greatest evenings I have ever had in show business and Whitney said the same. I know this will be another unforgettable affair. I can't wait to see all the friends we made the last time and look forward to making many more.

I'll be at all these appearances, alive and kicking, champing at the bit to forge ties between a couple of Yankee progressives and some courageous real freedom fighters in a great part of our country.


It's great to be alive!