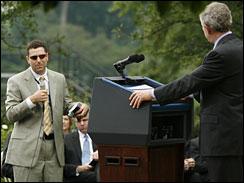 How dare you go blind while in my presence!

(Note: This is the first of a sporadic series called Lest we forrget. It will document the fact that it has happened here. )

I've often said that what protects George W. Bush is sane people can't watch him for more than thirty seconds. And that's when he's simply walking around not saying anything. Because even his body language is unbearable to witness. He carries himself with a self-consciousness rarely seen this side of a man attempting to nonchalantly duck into a North American Man Boy Love Association meeting. Those of us still maintaining diplomatic relations with Planet Earth can't take more than 12 seconds of actually listening to the man speak... except of course for dedicated professionals, like me, who have a duty to actually pay attention to his physical manner and verbal comportment.

So for those of you who've been unable to watch the littlest president enough to actually understand how he still can hoodwink twenty-something percent of the American people herewith a brief digest of his most commonly used techniques for wool-pulling.

Bush trick number one: He always acts as if his lame assertions are a bit over the head of the audience. He'll say "They're Freedom Haters." Then he'll lean forward, head bobbing back and forth and explain, "They hate our freedom!" Thanks for clarifying that complicated concept, prezzy!

Despite poll ratings that would indicate footage of W at the NAMBLA meeting has in fact gone viral, he always behaves as if he's ruling by popular acclaim. He always tells Americans what they think. He always deems to speak for us. He'll say, "The American people. The people from America... have a different idea. An idea that isn't the same. They don't want pollsters tellin' them what they think. They don't want this war conducted by Washington politicians. Politicians in Washington."

Can't disagree with you there, your minuteness.

Bush's third trick of verbal mastery: is that he countrifies his language,. This makes him seem down home even though more and more people are facing downright homelessness. He constantly employs phrases like 'folks' and 'neighbors' and he drops his 'g's.' Even if he talked about his policies in a forthright manner, he'd say" the American folk people, people folks from America and their friends and neighbors, their good neighbor friends... happen to understand why we have to do all this killin', maimin' and torturin'. And they don't want Washington politicians, politicians from Washington representin' their views. The American people folks have a different idea than that. That's what makes them uniquely American folk people. God Bless them and the United States of America"

Hey, it worked for Lonesome Rhodes!, why not Loathsome Bush?

His next device for rube-reaching is to conduct his public appearances as if he's the president of the bad frat in Animal House rather than the United States of America. This means he bullies anyone available in hopes that the rest of his audience will laugh nervously because at least he's picking on someone else. A classic example was when he cheap-shot a reporter with macular degeneration for wearing "shades" at an outdoor press conference. He always, always snickers smugly at his mastery of the putdown. Audience bullying works for comics without acts, why not presidents without viable policies?

Fifth: He says whatever he has to to get out of a situation. If they have him on the run, he lies. When its brought up again , he refuses to discuss it because to do so would be "an insult to the will of the American people folks, who don't want to mull over 'ancient history. History that's ancient."

The final and the most important element of George W. Bush's school of winning rhetoric is this: When there is no sane argument for what you're proposing , ladle a heaping portion of false generosity and state your detractors' case by making it even more ridiculous than what you're proposing. Anytime Bush is in trouble, here comes the surge of the straw-man... the Straw-man Surge. He'll say "Some folks say we shouldn't be concerned with terrorists planning to detonate nookewlar deevices in our American communities, where our friends and neighbors and people folks gather to live freely under the eye of a good and loving lord and if that's what they gonna believe, that's their right but I happen to think that it would be bad for weapons of mass destruction to be used on the American people, the people from America."

" I happen to think" is the phrase to watch for because in and of itself, it's shocking. Bush happens to think? Now there's a scoop!

Oh yeah, one more thing-- either because his meds are or aren't working, there is a very good chance that he believe his own bullshit. Unfortunately for him this is no longer true of the people folks of the U. S of A!