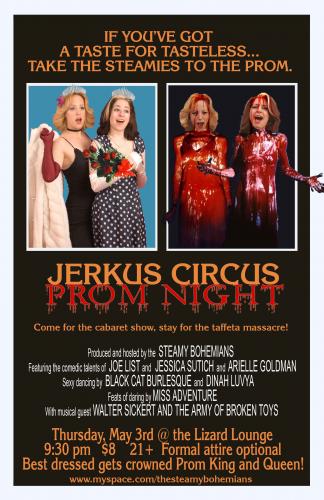 The Steamies even make favulous posters for each of their shows. The Fillmore Northeast!

My decision to give up performing was not made hastily. I've been mulling it over for years. There are several factors that augmented those I articulated in my previous post.

For starters, performing is a young person's game. That is not to say people of all ages shouldn't do shows. Had Muddy Waters, Louis Armstrong or Hound Dog Taylor gotten out at 53 (my current age) I'd have never seen them. But they traveled in a different world than today's. If they needed to eat after a show, they didn't have to go to TGIF's. Back then the country hadn't been homogenized in commerce and conventional wisdom. When I hit the road in the early Seventies everything hadn't been averaged out to facilitate an evermore-profitable slough of corporate schlock. People in different areas spoke in regional colloquialisms and not bumper sticker lingo. Nowadays you can sit in a tavern and eavesdrop on conversations that sound as if they are being read off of tee shirts. I won't "go there" any longer. But I will join the AARP if it can get the Stones to make discount tickets available to seniors.

Second -- touring is environmentally unwise. Why take a jet somewhere to reach a moderate-sized crowd when I can reach a much larger one using a keyboard or microphone?

Third -- I did the type of act I did for years because I felt I was saying things that need to be said. In Iowa last weekend I watched two young satirists, Tina Dupuy and Baratunde Thurston challenge a large audience with progressive wit. It's only natural that that audience would rather hear it from someone closer to their age than me. I was well received but felt like something of a deranged uncle before the assembled youth. A new generation has set forth and I'll be damned if I am going to get in its way.

Lainey Schulbaum and Nicole Luparelli, a couple of young women who perform as the Steamy Bohemians are blipping brightly on my artistic radar. This extremely talented duo has worked tirelessly for the past few years producing and starring in a performing arts-integrated cabaret they call the Jerkus Circus. They have also put out Technicolor Radio, a dazzling album that sounds like George Martin produced it. They are what I respect most in show biz: talented hustlers. They aren't waiting for the business to come to them, they are taking it to the business. By doing so they're maintain artistic and creative control of their careers. By doing so they're creating opportunities for others to do just the same. Now if only those others would get off their asses and emulate the Steamies, the age of the false Idol would soon come to an end.

There is also a generation that has reached its absolute prime. Working with Jim Infantino in Tennessee and North Carolina allowed me to watch a brilliant artist who completely has it down. Not only that, he packages exactly what I want to say in fabulous music and lyrics that send people home literally humming the truth. Check out and purchase his music -- and that means ALL of it-- at bigego.com.

Finally, I despise the Cult of Personality. Show business is in the worst shape ever because of it. A huge portion of what passes as entertainment these days is nothing more than video evidence of the lengths people will go to appear before a national audience. People who hate themselves crave external approval. They will also do anything for notoriety. The proof can be seen on your TV and heard on your radio.

Even great talent is being forced to enter contests in hopes of reaching a larger audience. Art is not a pennant race. No one ever said, "I give Rembrandt three stars." Reality television is nothing more than SCAB TV. They have found a way to phase out large numbers of writers and performers. People who have worked their entire lives to perfect their talents are now unemployed so that we can watch Donald Trump fire aspiring cutthroats. Like they say over ta France: Fuck that shit.

In addition to my performing career I have quite a bit of experience producing. I have a wonderful opportunity to help many great talents get a toehold in this business. In this new and even more disgusting climate, young talent needs advocates. I have a pretty good idea what they're up against and at least an inkling of what they are hoping to do. I will make myself available to assist deserving talent and shall continue to actively advocate for an artistic climate change that results in a nurturing environment for developing and established artists.

One place this is already happening is in Hartford, Connecticut at Real Artways. The project is center for all types of art in an abandoned and renovated industrial space. Real Artways is directed by my friend Will K. Wilkins (Win With Will K!) and provides a template for how to turn despair into hope.

Another fine example of this respectful approach to the arts is The Human Movement in Asheville, North Carolina. Founded by my friends Lori Penny and Jamar Sanders, the project is brand spanking new. But if they provide art and artists the props they gave to Jim Infantino and me at their first production, The Human Movement will grow into an unstoppable force for truth, justice and the human way.

Of course I can't mention positive artistic productions and not mention my friend Jimmy Tingle who has laid out his life savings to keep Jimmy Tingle's Off Broadway Theater open in Somerville, Massachusetts. This very weekend you can go down and catch Jim's Big Ego perform in an innovative production called The Ego and the Oracle. Go out and fill the joint.

There are a million other talented people I want to tell you about -- and I shall in future posts. The upshot is simple; don't mourn my departure from the stage, organize your friends and get out and support progressive performers.