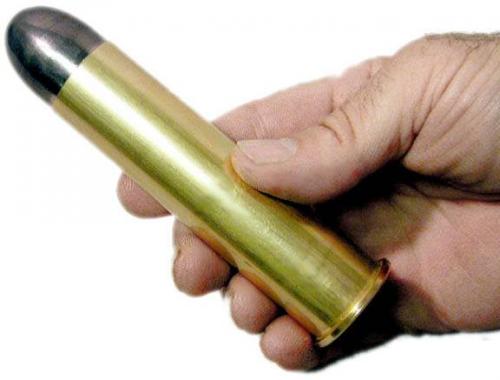 All the healthcare Americans will ever need!

Well whaddya know? It turns out the wars in Iraq and Afghanistan are making things safer in the United States.

The billion rounds of automatic ammo being discharged annually by US troops in those conflicts have left American police short of bullets.

So we've finally found something that's being sacrificed at home for the war effort.

Cops are being forced to pull people over rather than loose a clip into the old gas tank.

Indianapolis police are considering using paintballs on target ranges. The ensuing paint shortage will be great news for vinyl siding salespeople throughout the Midwest.

Domestic law enforcement has greatly upped its use of bullets since 9/11, expending vast amounts of ammo on target ranges. Much like George Bush, they spend lots of time focusing on imaginary terrorists.

"There's just a major shortage on ammo in the U.S. right now," says Darren Newsom, general manager of The Hunting Shack in Stevensville, Mont., pointing to his current backorder for 2.5 million rounds of .223-caliber ammunition. "It's just terrible."

Yes, how can anyone be expected to take down a rogue squirrel without an adequate supply of .223 caliber ammunition?

And then there are the unspoken victims of this tragedy: the militias, the lone nuts, the disgruntled office workers. Who will speak for them!

Of course the biggest beneficiaries of this munitions spree are the arms manufacturers who are now running their plants three shifts a day, seven days a week. Never fear -- they pay overtime on Christmas.

This country is armed to the teeth. Unfortunately much of the country no longer has teeth because resources that could have been allocated to dental care have instead been put into armaments.

This is just another indication of the altruism of America's gallant leaders: they are willing to go without ammo at home to make sure there are enough bullets to kill people half-way around the world!

If that means there aren't enough bullets to shoot at their own people, well, that's just how it will have to be!

I, for one, stand ready to make do with fewer bullets with my name on them.

Yes, if bullets meant for me are needed for someone far away, I say let them have them!

By the way, the estimate of a billion bullets per year is a pre-Surge number.

Which means Bush has been telling us that several hundred million rounds per year were inadequate in Iraq.

How can anyone be expected to pacify a country with one arm tied behind its gun belt?

Figuring that about two-thirds of America's war bullets are being discharged in Iraq, that makes 667 million bullets that must be distributed among a population of 27 million people every year. That's fewer than thirty bullets per Iraqi! Haven't these people suffered from rationing long enough?

Of course you'd think maybe the demands for bullets would have subsided a bit after the military lost 190,000 guns in Iraq.

Then again, if guns can be stolen in wholesale lots, it's probably no major effort for thieves to abscond with the ammunition needed to load those guns.

The bullet shortage can't come a minute too soon for broadcasters at KPFT, the Pacifica affiliate in Houston. Last week its studio was fired upon by an unknown assailant. When KPFT launched in 1970 its transmitters were twice blown up by the KKK. For some reason Richard Nixon saw no need to declare a war on terror, perhaps because it could have compromised his plan to reemploy his "Southern strategy" in his 1972 pre-resigning-from-office-in-disgrace campaign.

For a complete report, check out Scooter's Innerside from last Thursday. Available via streaming media here or download here or podcast here