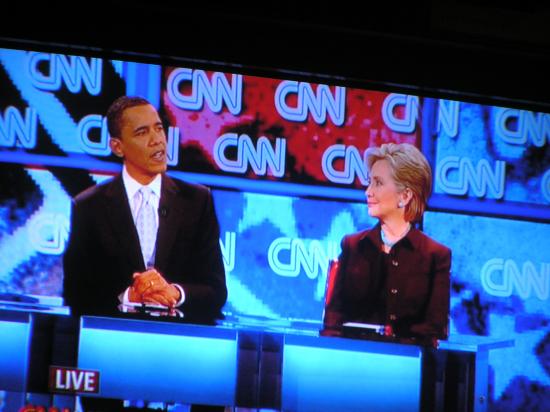 And now back to the increasingly inevitable conclusion of the horse race....

The John McCrotch controversy (my theory: he's just angling for that Bob Dole/Viagra platinum parachute. "Oh sure, I got castrated by the voters...") could end up doing more damage to the Clinton campaign than  to McCain's. As Al Giordano suggests, if Clinton is to have any chance at pulling off an increasingly unlikely miracle, she needs the full attention of the media and electorate. With charges and countercharges careening back and forth between  the New York Times and McCain, tonight's Democratic debate in Austin has become something of a sideshow. Disadvantage Clinton. Judging by the way Clinton has run her campaign, it would be no surprise to learn that the McCain story came from her operatives. And why not? They haven't gotten anything right so far. Yesterday we learned Obama has had over half a million people donate to his campaign just this year and nearly a million so far (and he should respond to McCain's calls for public financing by saying, "Thanks, already got it.")

Yesterday word oozed out of Clinton's camp concerning the formation of a 527 (and back to Al we go!) comprised of rich bastards who will try to reanimate her miserable candidacy. Just how will they do this? By swift-yachting Obama.

Yesterday was also the first full day that Barack Obama entered the fray in the March 4 states of Ohio and Texas. And where was Clinton? In New York City, raising money from those who will still need favors from her after she is sent back to the Senate. I bet that played well in Sandusky and Beaumont.

The idea that Clinton can select a few states and say "Obama's momentum will stop here," demonstrates the hubris that has embodied/embalmed her campaign. Does she think the people of Texas and Ohio haven't watched what's gone on elsewhere? Does she think voters in those states are going to say "Hey, I'd much rather be hit in the face with a tidal wave than get on top of it and have fun surfing!" Clinton has suffered ten thumping losses in a row. At this point, her core supporters are people tired of cringing in embarrassment for her. The only state she can be sure of is the sorry one she's in at the polls.

Even four years ago, Clinton may have been able to get her name epoxied to the fall ballot by a coterie of party regulars armed with nothing more than the cover of darkness and a few glue guns. How do you think Walter Mondale got foisted upon us in '84? But four years after Howard Dean demonstrated the potential electoral and fiscal power of grassroots composed of so many ones and zeroes, that potential has been realized by the Barack Obama campaign. (And when this campaign ends, the juice remains with all those ones and zeroes who had better be smart enough to use their power to demand specific action from the candidate they elected.)

Clinton's claim that she will be ready 'Day One' is contradicted by the fact that she's been ready for nothing on the campaign trail. In particular, she hasn't been ready to compete with an extremely well organized and evermore popular opponent. Nowadays, when you look at Hillary the campaigner, you see a candidate whose toughest electoral foe before this race was Rick Lazio. Sorry, but you need to play a tougher non-conference schedule than that.

Obama's campaign has organized in every precinct of the country. This has proven the superior plan to the "where in the world is Hillary Clinton?" approach of an opponent who now looks much more presumptuous than presumptive. Obama's camp has distributed authority to workers on the basis of merit. This has resulted in an enthusiastic and extraordinarily energized base of Obama activists. These people are flattening a Clinton workforce that too often is comprised of drones forced into duty by bosses beholden to the old Clinton machine.

Unfortunately for Senator Clinton, that once well-oiled machine of the 90's isn't nearly as efficient as the wiry and wireless workers of an Obama effort that understands that running for President of the United States requires serious organization in every one of the States.

All of the above has resulted in Senator Clinton's pitiful slog towards Doomsday One. Tonight in Austin, all Obama has to do is take two and bunt. Take the air out of the ball. Put in the prevent defense. Lay up short and chip. Oh hell, any number of sports maxims will cover it. When Clinton claims her opponent is not ready, who could blame the Illinois senator if he replies:

With all due respect, Mrs. Clinton, I have been ready the last ten times we've competed. So ready that I have beaten you by double digits in each race. Your last victory was in a non-sanctioned bout in Florida. It didn't count yet you celebrated as if you had earned something significant. Then you treated large chunks of the country, with real votes, as if they didn't matter at all. But of course they did and the reason they mattered can be seen in the delegate lead I have built up over you.

Throughout this campaign, you have been the person who has shown herself to be unprepared. You have shown yourself to be the one who is poorly organized. And so now you are going to try to cover up what the voters in state after state have decided by splattering me with mud. Like all of your other ploys, this also will fail.

We are well past Day One of this campaign, but since Day One, I have shown I am far more capable of overcoming the challenges that have stood between both of us and the presidency. The campaign is a winnowing process and we know who is about to be winnowed. So flail away, Senator Clinton. Raise a ruckus. It will give us something to remember you by.

Of course Obama won't get that hostile because to do so would violate several sports cliches. But from my still semi-nonpartisan perspective, the more I look at this, the more I have to at least respect Obama and his people for building a political machine that is in every way superior to the '92 Clinton.