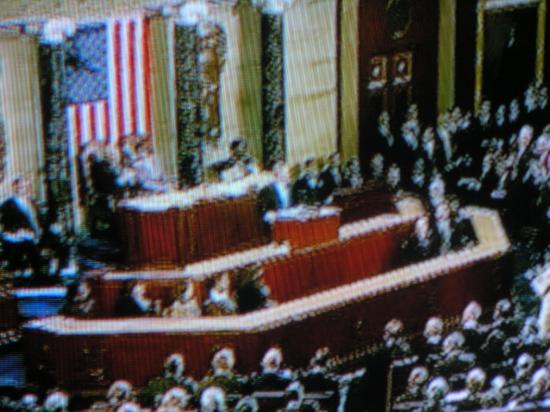 It was a night of vintage George W. Bush -- which is to say he was arrogant, alarmist, petty, presumptuous, preposterous, predictable, pompous, bombastic, belligerent, bellicose, dogmatic, defensive, delusional, disingenuous, duplicitous, self-righteous, swaggering, stammering, smug, smarmy, irrational, illogical, impervious, insincere, manipulative, maudlin, far-fetched, taunting, threatening, intellectually bankrupt, ethically bereft, factually impoverished, jingoistic and awful. He gave a performance for the ages and the ages will neither forgive nor forget him for it.

On the up side, so what? There's no longer any need to go after this clown on a lie-by-lie basis. Everyone know he's a joke. Everyone knows there's no salvaging his shit-encrusted name. Everyone knows that nothing will ever remove all the blood from his grimy hands. So the State of the Union is over and so is George W. Bush. Wiggle off into the sunset, you crooked little maggot.