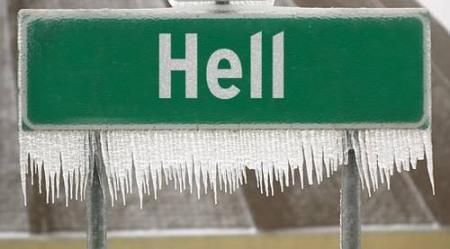 Bush will be enduring a cold snap when success in Iraq finally comes...

Bush's "new" policy for Iraq is "return on success," which is just another way of saying "when hell freezes over."

Of course when hell does freeze over there is little doubt that Bush will be trying to buy more time for his war in Iraq.

Well, that's what he'll do right after he puts on his parka, earmuffs and mukluks.

Oh wait, he'll already be wearing his earmuffs lest he hear the taunts of the more accomplished fascists populating hell.

The only things at which Bush has ever succeeded were avoiding National Guard duty and stealing a few elections.

Oh yeah, and starting a needless war and occupation.

Of course Bush's cronies have already received massive returns on failure in Iraq so success isn't exactly in their business plan.

Which is why Bush is talking about a permanent relationship with a temporary government.

Talk about passing the buck... Bush is planning on passing the responsibility for a trillion or so of them to his predecessor.

And of course this means that when the fabled "mission" inevitably fails and the US has to pull its troops out, Bush will be able to say it's not his fault because his plan was to stay there forever.

Bush said there are 36 nations involved in the occupation of Iraq, which should come as major news in about 33 nations.

Perhaps he hasn't heard the news about the sun setting on the British Empire and he's counting all of its former holdings as part of the coalition.

Either that or he's counting the nations still sending us Christmas cards as being in the coalition.

In any case, waiting for this speech was like anticipating taking a bullshit cream pie in the kisser and watching it was realizing your worst fears and more.

Now if you don't mind, I need a shower.