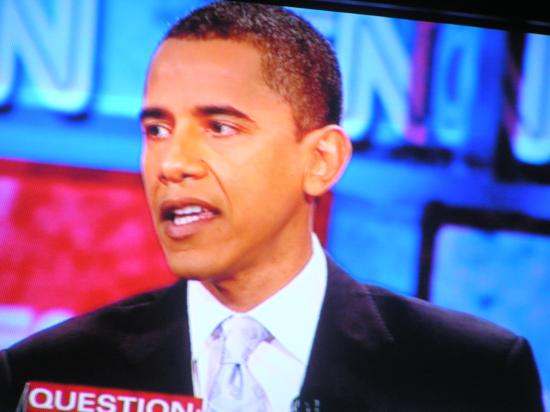 Hold it right there, Comrade!

I've listened to Hillary Clinton's case concerning the popular vote and taken it to heart. Quite frankly, I've been won over to the point where I'm a bit disappointed in Senator Clinton's failure to take a stronger stand concerning Barack Obama's elitist claims of front-runner status in the race for the 2008 Democratic presidential nomination.

A huge portion of Obama's support comes from new and untested voters. Why should we trust these strangers to the polling place? And just how reliable will their choices be? This election is too important to allow it to be decided at the whim of inexperienced voters. As far as Senator Obama's older supporters are concerned, for years many have been involved in un-American activities such as environmental activism, peace advocacy and protracted whining about human rights. They despise the liberties afforded capital in free trade deals. I guess they think we should put our money in jails, not banks! These malcontents have never met a president they liked and yet the country has been just fine. I shudder to think what might happen to this nation of ours if these flag-pin burners suddenly had a president they so much as considered trusting.

Then of course there are all of Barack Obama's so-called "African-American" supporters. Why are their votes instantaneously as important as those of the good citizens who fear "African-Americans" and their dangerous "ministers" who feel that church is a place to complain about poverty and injustice rather than somewhere where you get down on your knees to thank God for the gift of the Clinton family? So this isn't just about counting Michigan's and Florida's properly-cast votes. And it isn't just about eliminating the votes of all of those states where there were caucuses or where Democrats shouldn't even campaign.  It is about counting the votes of any of the people who conveniently surface whenever Barack Obama's name is on the ballot. And counting their votes as if it would be wrong to challenge them or their right to change the outcome of elections!  Where were these people 15 years ago when Hillary Clinton was trying to get us all healthcare? Where were these people when someone needed to take charge of the peace process in Northern Ireland? Where were these people when Mrs. Clinton showed the courage necessary to say that she would make lobbyists a part of her government so that she could keep a close eye on them? And how about when she told the Chinese about women? Where were these Obama people? Nowhere, that's where!

But now they have miraculously materialized and they are upon us for just one reason--to attempt to revoke Hillary Clinton's all but divine right to rule. And the rest of us are supposed to sit back and say nothing just because these mystery voters have carried Obama to "victory" after "victory." "Victories" provided of course you view the results of primaries and caucuses through the perverse prism of "total votes" and "delegates won."

To quote our greatest president, Bill Jefferson Clinton, "Give me a break!"

Let's take a look at the so-called 'numbers' these people are forever flaunting in an attempt to subvert our democracy. (And I tire of even calling them 'people' when they're really nothing more than a misogynist horde.)

Just so we don't set off any whine alarms, let's use totals from  the obvious Obama sympathists at Real Clear Politics. Like the rest of the media these people insist on claiming the Illinois senator has some sort of a lead.

That's a 134 delegate lead for Obama.

And in the national vote totals they have Obama with 14,751,703 and Clinton with 14,141,255. This means a '610,448' vote lead for Obama. All of the above totals look great for Saddama or whatever his name is, except for one thing-- both the delegate and popular vote totals on the Real Clear Politics site are based on results that count the votes of the discredited Obama supporters. In fact, if you go anywhere where they are keeping these tallies, they are all just about the same because one after the next goes ahead and counts the tainted totals that have been skewed by all of these Obama people who seem to think it's their job to choose a president. So the next time someone tells you that Obama has insurmountable leads in both the popular vote and the delegate total, just say,
Hold it right there, Comrade! Let's take another look but this time, we won't count any of the inexperienced and/or dissatisfied voters who have yet to prove their trustworthiness to the American people. We can't afford to risk our precious electoral process so frivolously. In this age of global terrorism, Americans will not permit anonymous voters to hijack our election.

So let's take a second look, this time without allowing the totals to be adulterated by this clearly dangerous and unpatriotic voting bloc. Suddenly Hillary Clinton has 1,592 delegates -- that's more than 1500 more than any properly sanctioned opponent. Wow! Where is the media on this one? And how could it miss the 14 million vote bulge she holds over opponents who are reliable enough to allow to have vote totals? Mr. Olbermann? Mr. Blitzer? Anyone? I'm waiting. America is waiting. The world is waiting.