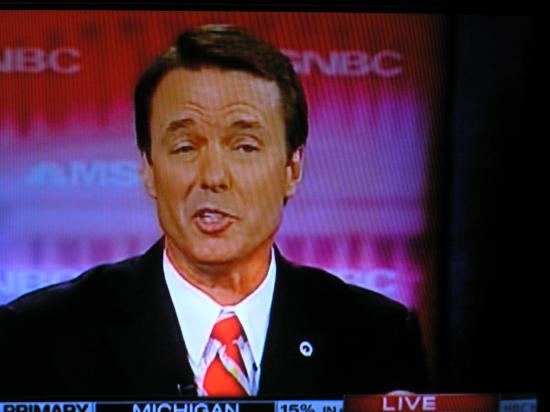 Many people are justifiably upset by the lack of coverage  that former Senator John Edwards' campaign has been receiving from the mainstream media. When it does get mentioned, the publicity too often includes phrases like 'do or die' or 'under-financed.' Thanks for nothing.

When the Democratic candidates debate, Edwards is frequently considered the most eloquent and the one who speaks most clearly as an advocate for the downtrodden. Considering how many of us are downtrodden these days, that should give him a pretty big base of supporters. Unfortunately that base is repeatedly told that Edwards has been all but eliminated from the race. Unfortunately the downtrodden believe in disappointment.

Poor John Edwards must be very frustrated by all this. You know who can relate? Congressman Dennis Kucinich. Last night he wasn't allowed to participate in the Nevada Democratic debate, even though he'd originally been invited. Kucinich represents hundreds of thousands of Americans who are again and again told that their desires for a peaceful, egalitarian and environmentally responsible society are nutty and impertinent. So even when they support a candidate enough to qualify him for federal matching funds, corporate media goliaths like ABC (in New Hampshire) and NBC (last night in Nevada) can unilaterally eliminate that candidate.

The removal of candidates from the debate here in America, where we are forever subjected to windbags blathering about the 'marketplace of ideas,' is either ignored or celebrated by the media. Commentators tell us that a narrowed field means that "now the candidates can get down to business." Unfortunately, as the field is narrowed so is the the spectrum of political thought. More and more it becomes a clash of personalities, personalities who have less and less to say about what really concerns the public.

So Dennis Kucinich gets no shelf-space in the marketplace of ideas. And you know who never once complained on his behalf? John Edwards. Poor Dennis Kucinich must be very frustrated. You know who can relate? Former Senator Mike Gravel. Gravel was the courageous soul who read the Pentagon Papers into the Congressional Record to make sure that the Nixon Administration couldn't bury them. In the early debates this year he made news by referring to the rest of the Democratic field and saying 'some of these people scare me.' Can you imagine? One of the people he was not referring to was Dennis Kucinich. He probably wasn't too fearful of Edwards either. You know  who never once complained on Mike Gravel'sbehalf when private concerns decided to remove him from further participation in debates of candidates for public office? John Edwards and Dennis Kucinich. And so this guy isn't even allowed to park in the lot at the marketplace of ideas. Poor Mike Gravel.

Yesterday, Kucinich fought in court for his right to participate in last night's debate but the Nevada Supreme Court decided for the fixers who want the Democratic field reduced to be a three-person race, starring two people. So the house won in Nevada -- what a surprise!

It should be no surprise that the house has been winning on the Republican side as well, where candidates Congressman Duncan Hunter and Congressman Ron Paul have both been eliminated from debates. Paul recently managed to get back in, thanks to a mob of his supporters that chased FOX jamoke Sean Hannity around a New Hampshire parking lot. After barely escaping, Hannity got on his cell and begged Rupert Murdoch to placate the howling crowd before it could hunt him down and extraordinarily render him to an undisclosed spot in in the Rockie Mountains.

Anyway, back to the D's. Whether Edwards has noticed or not, the media is sizing him up for burial next to Gravel and Kucnich. It measures the pine box when it discusses his 'under-financed presidential bid.' It pounds in a coffin nail with each reference to his 'flagging campaign.' One of these days it will lower him into the ground and throw dirt on him by deeming him no longer viable enough to participate in a debate. Who will speak for him then? Dennis Kucinich? Mike Gravel? Probably not, but even if they do, they won't be heard because the media never quotes anyone it has buried alive.

And what will he be able to say in his own defense, especially considering that downsizing of the field is an idea he first expressed in a whisper to Hillary Clinton last July at the NAACP Forum in Detroit? Probably very little. And so, hoisted on his own petard and obscured by the shadows of Barack and Hillary, he will be left to consider a sequence of events that began when first they came for Mike Gravel.

Last night's debate was in Nevada but had little to do with the state. How could there be no mention of  the Clinton campaign's operatives incredibly undemocratic attempt at voter suppression? For more, check The Field.

The debate lasted so long the casino bosses must have been going crazy. A lot of slot machines went ignored because of a marathon that was much more of a waddle than a sprint.

Mitt Romney's primary win yesterday proves Michigan has a soft spot for overpriced products that no one else is buying.

Turnout was  very low so Romney is riding a wave created by 39% of voters who took a Republican ballot in a primary that had somewhere between 15 and 20 percent of registered voters participate. Mandate!

The people of Michigan have spoken and they have said, as if as one, "Leave us alone!"

To win, all Romney had to do was promise Michigan that he will revitalize the American automotive industry. What's he going to promise to South Carolina? That he'll vacate the Emancipation Proclamation?