Up close and unbearable Monday, January 7, 2008 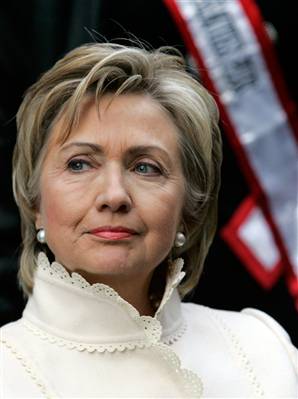 Please forgive my continued focus on the calamity that has become Hillary Clinton's campaign. For me, watching the insincere and condescending Clinton deteriorate from presumptive nominee into presumptuous wannabe has made for hours of delightful information consumption.

Hillary Clinton demands to be the center of attention. The lesson of the past several days is: be careful what you (royally) wish for.

Clinton's personality deficit-fueled collapse should not come as a big surprise to anyone who has ever been in close proximity to the candidate. Don't believe the insiders who tell you how nice she is in person. That's shoveled from the same mound of bullshit that was used as mortar in assertions of her inevitability. Like the voters in Iowa and New Hampshire, I've been in close proximity to Hillary Clinton and it's scary. The closer you get, the closer you are to a glaring veneer of phoniness that does nothing to obscure her pronounced sense of entitlement, superiority and an almost pathological humorlessness. These conclusions aren't because I  hold Mrs. Clinton to some misogynist tenet concerning how women should behave. I dislike Clinton because she doesn't behave as I would hope any other human would behave.

Anyway, Mrs. Clinton is used to intimate gatherings but for a long time her smaller get-togethers have been peopled with kiss-ass politicos and phony "It's soooo nice to see you" rich fuckers. Put her in a roomful of Carhartt-wearing working folks and her artificial aura becomes unavoidable and almost threatening. Her personal interaction with the masses is stiff and patronizing. Please tell me all about your little life. Even though small town folks tend to be reserved, they're comfortable among one another. There are times with rubes (and I'm a natural born rube) when an almost telepathic phenomena occurs and everyone draws very similar conclusions, very quickly. Often enough, hayseeds can be hornswaggled by an outsider but there are other outsiders who get nowhere with them. Hillary Clinton can survive in the boondocks, providing she's with her husband or surrounded by an impenetrable human shield. But left on her own and forced to feign accessibility, she's the disaster we've been watching develop over the past several days. And everyone knows it.

Sen. Clinton grates on people. She's an impatient, immodest, imperious know-it-all. We already have one of those in the White House (except there is something about him that appeals to dopes. It;s probably his dopiness.) She got beaten fair and square in Iowa but came away making excuses and cheap-shotting the state. People don't like that. A loss is a tough moment. Presidents face many tough moments. Those moments demand humility. After Iowa, Sen. Clinton only demonstrated arrogance, only offered alibis. She's never eaten so much as a sliver of humble pie. That doesn't wash with the regular folks.

Even after Iowa made it clear that her biggest problem is that people find her pretty damned insufferable, she still can't resist the urge to boss us around. You people stop listening to other candidates and their words. I am better than you! Obey me! She commands us to look beyond the speeches and pay attention to what happens "when the cameras are turned off." Some of us have been doing that all along, which is why we understand that she was the frontrunner only when it came to collecting checks from the vested interests that are literally killing our nation. No candidate, Republican or Democratic, has taken more money from the insurance and weapons industries. If we didn't waste so much money on weapons, we could all have healthcare. And we could have healthcare upon demand and not healthcare upon approval of the insurance rackets.

Since late in Iowa, she's attempted to co-opt the issue of change, telling us that only her self-proclaimed 35 years of promoting change counts. But when you look through those 35 years, you'll find many of them were spent as a corporate attorney and even as a Wal-Mart board member. Eight more were spent as First Lady. Will Laura Bush someday run on her record? The one thing Hillary Clinton did change was her address when she carpetbagged her way back to Washington via New York. Change certainly has nothing to do with her aforementioned fiscal underpinnings - they're made of large-denominated bills. Because of all those big-billed backers, when Hillary Clinton offers you change, chances are you're going to end up with a pocketful of slugs.

Political discourse should be heated and challenging. It's a battleground of contrasting opinions so naturally it's contentious but such conflict should only take place concerning matters of significance. Clinton's broken-record promise to fight the "Republican attack machine" is just a pledge of four more years of debating every insipid and distracting point raised by jackals like Ann Coulter, Rush Limbaugh and dozens of their imitators. Reactionary shills just want to get our goat, change the subject and steal the spotlight. It's stupid to announce you'll fight them every step of the way, and that you'll continue to allow them to describe the boundaries of the debate.

Nothing will scrap this so-called attack machine as quickly as neglect. FOX-NEWS might not even be broadcasting anymore if not for all  the suckers regularly checking for tasty bait in Rupert Murdoch's alligator trap buffet. As far as Washington itself is concerned, a few dozen name-brand Republicans are retiring rather than risk the wrath of the voters. Much of the Clinton family feud fight has been with sinister charlatans like Tom DeLay, Dick Cheney, Rick Santorum, Duke Cunningham, Bob Ney and numerous others who either slunk out the back door or have heard the front door clang shut on them. Leave these assholes in the exercise yard where they belong.

By February 5 we'll have a good idea of whether or not Hillary Clinton's dream of continuing her family's tong war will be realized. At this juncture it looks like one repeat the networks won't be running. Regardless of proper grammar, Mike Huckabee uses the 'word' 'irregardless.'

Huckabee becomes worse when he ratchets rightward because no-nonsense tough talk undermines his appeal as a sometimes-not-awful Christian. Except he believes in the fucking rapture so he's mentally ill. We already have a mentally ill president.  He also said he thinks Guantanamo is "too nice." But who doesn't?

Romney is insufferable. His ability to cover up a corporate scandal at the Salt Lake Olympics doesn't recommend him to me. Also, the jobs he says the corporations  are creating all seem to either end up in China or suck so much you need two of them to survive.

My friend Tom Duffy of the Garlickeeps pointing out that Bill Richardson is openly running for VP. It just looks like he has hitched himself to the wrong presumptive nominee.

Someone wrote yesterday (I apologize for the lack of attribution, I saved this yesterday and somehow failed to inlude the link): The Clinton campaign here is countering with a solid organization and plenty of out-of-state help of its own, including a strike force of 200 volunteers sent north by Boston Mayor Thomas M. Menino.

The Menino strike force was last seen passing through Baltimore.

Much as with ABC and Dennis Kucinich, Ron Paul and Duncan Hunter should not have been excluded from last night's  Alligator Trap Network Debate.