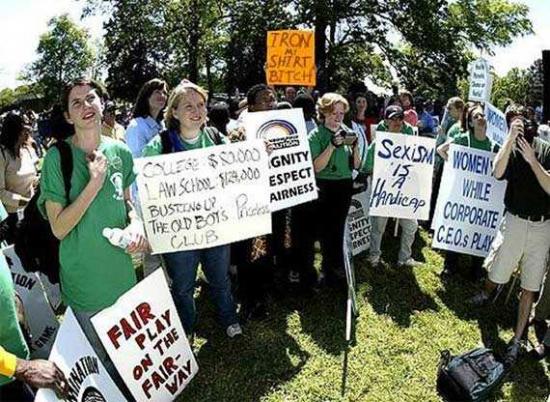 Two men disrupted a Clinton rally yesterday when they  held up signs that said "Iron my shirt."  They also chanted the demand for laundry service. It was an obvious morning zoo stunt-- the same as the one pulled by some clown at the Masters golf tournament a few years ago.

Clinton, powers of deduction as sharp as ever,  called the interlopers sexist. She then joked that she'd be happy to teach them how to iron.

The boneheads weren't looking to damage Clinton so much as they were looking to get publicity and make themselves legends in the radio stunt game. The fact that Clinton took them seriously by denouncing this inane prank as sexist means that she took the bait. Believe me, they will be replaying her remarks this morning on morning zoos everywhere. And they'll be laughing at  Clinton for finally showing she has a sense of humor at a moment when she didn't get the (albeit stupid) joke.

The other big Clinton story involves her getting misty when she was asked "how she does it?"  As Clinton began choking up, she said "I have so many opportunities for this country." What does that mean? I think it means (emotion aside) this is a pretty self-involved candidate. I don't think she was discussing what she personally stands to gain when she mentioned opportunities for this country. I do think that at least part of the reason for this misstatement relates to her narcissism and megalomania. And I do think the mistiness had something to do with her realizing that her dreams of the presidency are melting faster than the snow during this January thaw. That she attributed it to concern for  a nation not wise enough to choose her as its leader makes it a bit harder to feel much sympathy for a tired candidate.  So, in an odd sort of way, I discount all the speculation about her crying on cue. I think she really is frustrated and frustrated people get emotional.

It's 56 degrees here today and for the first time since before Thanksgiving, the yard is visible. The woodpile needs a reorganization, downed limbs and branches need to be picked up and Lettie and Lu's various toys as well, um, other deposits need to be relocated. More later today.