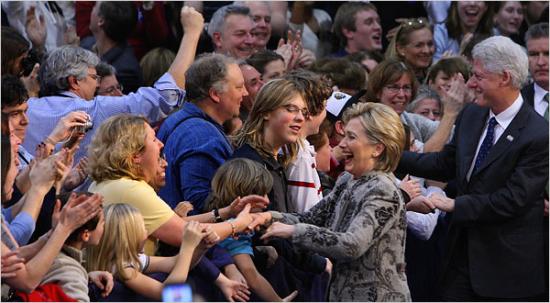 The people of New Hampshire have spoken and they've said, "Hey, you kids get out of here!"

As a writer, I was pleased to see the Granite State repudiate the value of words.

And thanks again to bonehead radio stunt guys for helping push Hillary over the top.

And thanks to the folks of New Hampshire for allowing a man with a drawl to forbid them from voting for a black man.

I let those people elect me twice. And they turn around and run one of their own against my wife? What ingratitude!

Perhaps this would be a good time for Barack Obama to apologize for voting for renewing the odious Patriot Act.

I'm sure many woman --and men-- decided to respond to sexism with the only woman they had in the fight.

So they stood by their woman, perhaps figuring that she sure as hell can't screw things up any worse than they already are screwed up. It's a tough argument to refute.

Of course the argument doesn't take into account her contributing role in our sorry state of affairs.

As I've said many times, were Hillary representing Mother Earth rather than Fatherland, I'd have been an ardent supporter long ago.

But she won and her people did the job and within the nasty realm of politics, you have to acknowledge their accomplishment.

Liking it is another story.

NPR said McCain won because of his "take no prisoners attitude." McCain is fortunate the North Vietnamese didn't have a similar attitude way back when.