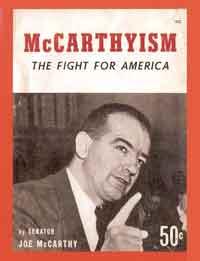 Stupidity is strangling free speech in this country. Those that employ this tactic would be stupid -- if it didn't work. Since it does, the truly stupid are those who are silenced by it.

If someone comments on a crucial issue in a timely fashion and by doing so somehow questions the myth of America -- Savior of the World, theyre immediately accused of "politicizing" that issue. This happens even though 99% of the time the subject in question has been patently political for years, if not centuries.

The lucid examiner of a question is accused of everything from being a corruptor of our youth, to an apologist for terrorism, to  to a traitor. This McCarthyistic ploy is enough to let everyone know where the line is drawn. To be caught on the sane side of that boundary is to be stranded unarmed in a free-fire zone of mudslinging.

The reactionaries intensify their own politicization of the issue with a campaign of character assassination and censorship while the speaker's natural allies cower in silence, or worse, denounce the truth-teller/seeker. As anyone who has ever hoped that the Democratic Party would arise and bravely stand for whats right knows; bad things come in threes, like cocks crowing.

Exhibit A in this nightmare of character assassination and cowardice concerns terrorism. If we are to ever truly minimize this growing threat, we have to consider it in its full context. We have to understand that one man's terrorist is another's patriot. We have to understand that the heinous acts of 9/11 did not occur in a vacuum, that there were all sorts of indications that plenty of people in this world feel that the United States has done irrevocable harm to them and to their friends and families. And many of these people wanted vengeance. Stupid, violent vengeance. We have to understand that people fight wars with what they have, Since there is no taking on the world's only superpower in a conventional war, our enemies adopt other tactics. But in America, all's no longer fair in war, unless the US does it. So it's not terrorism to bomb and shell civilians, abduct and disappear prisoners, torture and humiliate those captives and set loose an army of mercenaries, under no constraint of military law, to commit acts that provoke retribution against uniformed American troops. But only when the USA is behind such actions. When others do such dastardly deeds they're "freedom-haters." The US does it and it's because we so love freedom. Sane and intelligent discourse concerning terrorism would include at least an estimate of the context within which the world views our nation and its hypocritical and injudicious actions. But for an American to include such valid considerations in the discussion of terrorism is to phone in ones coordinates to reactionaries who then start carpet-bombing with catcalls about "blaming America first."

Well stock up on hot air, neocon neofascists because this blog will ask questions that are much more formidable than your ludicrous bluster. Blame America first indeed! Who cares the order in which blame gets handed out? Any reasonable person despises kidnapping, murder and fascist dominance-- whether its employed by Osama bin Laden or the United States or the thugs in Darfur. The point is: there is American culpability in this hellish labyrinth of violence. As an American; I have more of a chance to do something about my country's conduct. So naturally I begin by suggesting we form a neighborhood committee to clean up our own backyards. You see, I believe you can only promote civilization by behaving in a civilized fashion. This makes me a far left whacko in this country. Send me the tee-shirt and I'll wear it.

Mudslinging reactionaries are forever hiding behind "our troops." This term is generally used to protect a bunch of chickenshit chickenhawks who want to be questioned in an open, lucid and penetrating fashion even less than they desired combat duty in Vietnam. Of course if we hadn't been cowed into cowardly silence, these alleged leaders would have never been able to respond to 9/11 by acting in such an arrogant, foolhardy, cynical and politically illiterate fashion. Only the pathologically naive and/or deranged don't now understand that this administrations insanely inappropriate response to 9/11 has done more to promote terrorism than Osama bin Laden could  ever have  -- even in his wildest dreams.

The narrowness of the American debate requires not just media censorship but self-censorship. How can we discuss the nightmare that is the Middle East and yet almost never include the USA's relationship with Israel? I don't know... but considering how important a factor it is in how the US is viewed by the rest of the Middle East and world, it is insane that it is not. But bring up Israel to any of your elected officials and watch how quickly they cchange the subject.

It's all so simple -- until we take a hard look at our own blunders, shortcomings and yes, crimes against humanity, we look like silly, hypocritical blowhards to the rest of the world. You know why? Because we are.

If this were a truly free nation, we'd thoroughly air out vital issues and abandon our mythological view of our nation. Because we are not the best hope of the world, no, we are much closer to becoming the bane of humanity. Even sadder; the vast majority of Americans havent even a vague hint that this is the case. Theyre too busy avoiding information that could result in their taking stands that would lead to having their common decency questioned by some uncommonly indecent reactionary thugs.

Next time: The politicization of guns!