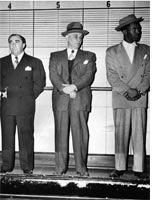 My old pal Tom Duffy has come up with a new idea for dealing with an administration that's so secretive, it's transparent. If Congress won't impeach then it's our duty to make a Citizen's Arrest. Duff also made a lovely mention of The Devil and Dick Cheney. Both can be found on his effervescent blog, The Garlic.

Dennis Perrin gave my latest Phoenix piece nice note on the Huffington Post as well as his blog. Dennis Perrin -- A Red State Son. "Son" is simply must reading. It kills me that on Huffpo they've decided he's supposed to write about entertainment and "living" and other peripheral matters. Obviously Dennis will get to all that and get to all that with aplomb but anyone who would choose to limit this guy has no right to rail about censorship in the media. There isn't a better or more important writer than Dennis in the Huffington on-line empire -- just better known usual suspects. So please go to Huffpo and read and comment on Perrin's posts. Let them suck in the crowds with cult of personality hacks and monied children but let them leave with a dose of Dennis.

But then...
What are we to expect in a country that is, truth told, rather liberal but is only given neo-liberals and neo-conservatives to choose from at election time? Hilary Clinton says we need more cops on the street. Yeah and in our underwear drawers and listening to our phone calls, too! She said Saddam had WMD's and was harboring al Qaeda before the invasion and occcupation of Iraq. But now she almost, sort of, might oppose the occupation of Iraq, providing there's a proper timetable and the US maintains permanent bases there. Hey, that's courageous if you're a mealey-mouthed, wholly owned subsidary of the multi-nationals. Barack Obama refers to Afghanistan as "the good war." Right. The only outside invader who ever dominated that country for an extended period of time was Genghis Khan and he had to move his headquarters there just to remain in control for several generations. Come to think of it, if Obama decides the US government should meet in Kabul, he'll have my enthusiastic support.

Please don't forget that it's it's only 16 months from an election so it's time we woke up and lowered our expectations! The Supreme Court is at stake! Oh wait, I guess it isn't. But if we don't elect a Dem then there might soon be a Supreme Court without anyone to write those stirring minority opinions! So there is something at stake!

The Devil and Dick Cheney was also picked up and mentioned by my old pal Bartcop. I hereby commute his sentence for his early ensorsement of a certain candidate mentioned above. The thing about Bart is; you can disagree with him and he'll print it. The other thing is he is a stubborn S.O.B. so he will be tough to dislodge from his decision to support the candidate he feels is most likely to win and give us anyone but a Republican. But I'll work on him.