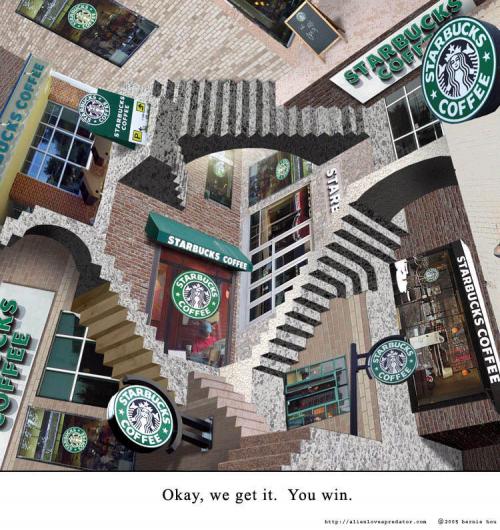 Activist extraordinare and Motown Survivor grand champion John Joslin saw yesterday's post and led me to the IWW's excellent Starbucks Union site. Check it out and you'll learn that, as I deduced from its press releases, Starbucks is much better at spin than actually delivering on its implied promises. For instance: healthcare for Starbucks cafe workers is an urban (and suburban) myth because long ago the company went to an all part-time barista workforce. Don't work enough hours? No healthcare for you. Listen to this radio debate between a Starbucks union activist and a company shill.

Given the reality of working at Starbucks, the company's creation of a socially responsible image is testament to its public relations prowess. The company boasts of providing health care eligibility even for its part-time workers (never mentioning that all of its retail hourly workers are part-time). The fact is that an employee must work 240 hours each quarter to become eligible for health insurance. Because of the lack of guaranteed hours, meeting the quarterly hour requirement is far from assured. For workers who do qualify there are still the premiums, co-pays, and deductibles, and these are costs extremely difficult to manage for employees making six, seven, or eight dollars an hour. Incredibly, Starbucks, the self-proclaimed leader on the issue of employee health care, will not release the number of retail hourly workers that actually receive company health benefits. Even Wal-Mart releases that number. In fact, the recently leaked memo from Wal-Mart that advocated increasing part-time employment to cut health insurance costs is ancient history at Starbucks. ['BUCK$ CEO] Howard Schultz made that move years ago- when he degraded all jobs to part-time.

Thanks, JJ. From now on anything we hear from Starbucks will be filed under 'java jive.'

Turning to labors of love....

At 8PM EDT Wednesday night Showtime airs When Standup Stood Out, Fran Solimita's documentary about the halcyon days of the modern Boston comedy scene. Thanks to Charlie Ray ( Maniac- Ma.) for the tip.