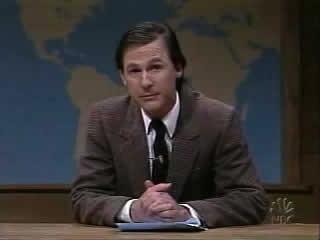 We were old friends but it must be said: A. Whitney Brown has gone too far.

His recent penchant for hero-baiting has proven one thing for sure -- he's THE Witless Brown. His recent YouTube video, "I support the troops" has aroused a drowsy nation. Dozens of bloggers have said in a single voice (almost as if they all got the same talking points): No one has ever heard of any us, ever, but that doesn't mean we shouldn't demand that everyone ignore A. Whitney Brown because he isn't as famous and successful as he used to be. Not even the swaggering Brown can refute such bold logic.

Under the guise of 'satire' he's decided that it is his place to comment on United States foreign policy and the role its citizens play in it. What does he think this is? A democratic republic? Doesn't he realize that the President of the United States recently signed an executive order that gives him the right to remove A Whitney Brown and his alleged First Amendment rights from the streets of this great land? Let's hope the First Amendment is the last amendment he will ever use.

Who does Brown think he is to to publicly belittle "...politicians,... religious leaders, news people, commercial businesses, beverage makers, car companies, (and) defense lobbyists" for using our troops as stooges in their personal medicine shows? I'd like to see Brown try to sell a Ford Explorer without waving a flag. I'd like to see Brown attempt to justify Halliburton's price-gouging without first disorienting the public with hoo-haw about the brave troops he so snarkily lampoons.

And doesn't he understand that the very troops he makes sport of are in Iraq fighting for his right to be a satirist? Lots of these kids were reticent about boarding troop transports but once their commanders made an impassioned plea on behalf of purveyors of sane dissidence, not a one turned back. And perhaps Brown has forgotten that the only reason he can still practice his craft at home is because of all the brave National Guardsmen who have fought the North Vietnamese hordes that arrived here to assault satire after his ilk sabotaged America's noble efforts in Southeast Asia?

Mr Brown also posted his tripe on the Daily Kos. I guess he isn't happy simply undermining our troops and their families when he can also destroy our all-encompassing two-party system. It's an open secret that the Kos website is operated by Democratic Party operatives. Does Brown want to give the president reason to ban this political party? Up until now we can proudly say that the United States has as many viable parties as Nazi Germany and the Stalinist Soviet Union combined! Perhaps he doesn't appreciate the wonders of a system that forces corporations to cut two checks come election time. Well then get out of the way, Mr. Saturday Night Live, a big parade is coming through and we don't want you in it. We happen to subscribe to the happy myth that we live in a pluralistic nation. We happen to respect all the time and effort that went into building up the DLC, not to mention the 'new' Democrats who have no use for old ones.

And if we start thinking twice about what our troops are doing and who they are killing, what's next? Perhaps Brown feels we should consider the millions of peasants now living in mega-slums who provide the virtual slave labor that keeps prices of electronically operated plastic devices so vital to our nation at historically low prices. Well sorry, " A Witless Brown," we happen to like the blenders on our cell phones. Brown's little skit promotes a dangerous underlying message: think for yourself! He couldn't do more damage to this nation if he pulled up Lady Liberty's skirt and took a jackhammer to her rectum. I for one will not encourage or support such behavior. The business of America is business. My business is being funny and telling the truth.

I don't need the likes of A. Whitney Brown doing it better than me.