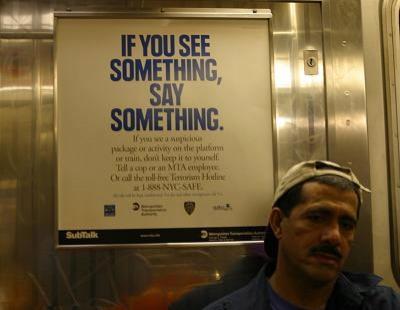 Don't just stand there -- turn someone in!

Bush's demand that the law be passed was really just a threat veiled in Saranwrap. It was a threat that said "Karl Rove and I will fear-monger you right out of office if you don't expand powers I have already shown no ability to do anything with but abuse."

Of course this would be no threat at all to any elected official in touch with his or her constituents because this country has had enough of bluster. enough fear.

And so the Senators and representatives who caved into this bullying have not only given into thuggish alarmism, they have also said they have absolutely no respect for their constituents.

Because only morons can be influenced by Bush, Cheney and their henchmen these days.

So they voted not their conscience but their cowardice. As did all all those moderate Republicans we keep hearing about.

With their votes they have said they fear George W. Bush, a man with absolutely no credibility, will discredit them.

So now all Dubyahoo needs to spy on us is an OK from Alberto Gonzales.

While we're at it why don't we put Dick Cheney in charge of fish and wildlife?

Well as I have stated before: if government snoops want to know what I'm doing and thinking all they have to do is read this blog.

They needn't waste money monitoring my phone calls or reading my e-mail. I'll say it right here: I consider them to be archenemies of humanity.

I agree with Dennis Perrin-- skip impeachment and go right to the war crimes trials.

So save the wiretap unless you want to risk exposing your minions to the kryptonite  that is reason.

Because George W. Bush and Dick Cheney are international criminals.

Don't believe me? Ask a foreigner.

Speaking of Dennis Perrin, you really ought to read what he has to say about his trip to Chicago for the Daily Kos Convention. But only if you like reading smart, funny, unblinking essays overflowing with trenchant insight.

Fear may or may not work on the American people but clearly it works on elected officials.

Because he knew that the I-35 bridge was likely to hold up about as well as Bush's claims of WMD's in Iraq but he did nothing about it.

So rather than repair or replace the bridge, Pawlenty opted for increased inspections.

Just one problem: the most dangerous parts of the bridge