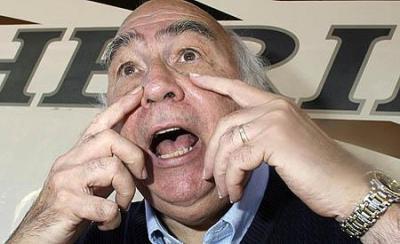 Old King Coal is a mean old troll and a very souless troll is he.

I'm sick of seeing federal officials standing shoulder to shoulder with mine owners at times of needless tragedies.

Particularly mine owners like Robert E. Murray, who should be in the custody of  federal officials.

Murray, president and chief executive of Murray Energy Corp has the blood of nine good men on his hands as a result of the Crandall Canyon mine collapses.

Last year Murray, a man who says global warming is a hoax, told the Columbus Dispatch,  "I resent these politicians playing politics with my employees' safety. I resent them because I take the safety of my miners to bed with me every night."

Mr. Murray failed to disclose the unspeakable acts he commits against his miner's safety in his bed but it's not hard to imagine.

I'm sure a shaft of some sort is involved.

When was the last time a federal official stood next to an actual miner at a press conference?

Murray has been lying about earthquakes causing the collapse at Crandall Canyon.  The  cause of the collapse was unbridled greed.

He has been using the attention this calamity has brought to rage about environmentalists and government regulators.

I'm sure that has brought a lot of comfort to the dead and missing miners' families.

Pigs like Murray feel they have so much say over what happens to this planet that they can create earthquakes with a mere public pronouncement.

So what if the seismic shock was caused by the collapse you ordered inside your mine, eh, Mr Murray?

A collapse that is the key element in 'retreat mining,'King Coal's version of licking the bowl.

Retreat mining actually requires pulling the roof of the mine shaft down!

I'm sure Murray Energy will provide nice tombstones for the six miners who are missing and the three more who died trying to save their brothers.

But Murray will retain mineral rights to the tombstones, just in case they're discovered to contain a vein  or two of anthracite.

Robert E. Murray shouldn't be speaking at press conferences. The next time he speaks in public should be when he's asked to enter a plea at his manslaughter arraignment.

Murray's arrogance  is nothing new in the mining racket. But his attempt to bury us in bullshit is truly enraging.

If only because it represents the industry standard in an racket with absolutely no shame.

Coal poisons us, kills workers and destroys communities but those who foist it upon us expect us to be thankful for all it does for us.

Regardless of its new campaign to sell us 'clean coal,' the coal industry is as dirty as can be.

All 'clean coal' is, is proof that corporate scum can put any two words in a row it wants and then spend millions to promote those words.

Even if they contradict one another.

Clean Coal is a laughable phrase -- sort of like "responsible federal mining officials."

Hey kids. don't forget to wash your hands and face with plenty of clean coal!

What they are selling as "clean coal" was what they were fighting years ago.

Cleaner coal results from scrubbers installed on smokestacks and other improvements that were made that at least mitigated the horrible consequences of burning coal.

Unfortunately scrubbers weren't installed on the souls of mining officials.

And so the industry now celebrates regulations it has fought tooth and nail to prevent -- as if  those regulations are part of an altruistic initiative that was the brainchild of benevolent Old King Coal.

If only we had a government capable of creating and enforcing regulations that would actually destroy an industry that is choking the world to death.

There are all sorts of safety measures that should have been in place for those miners in Utah. Things like oxygen tanks, escape exits, safe rooms, food and water, communication devices.

But they all cost money and coal miners lives are cheap, at least to men like Robert Murray and so  honest and hard workers are sent back into abandoned mines to kick out the pilings so as to squeeze out the last few morsels of coal they hold.

Last night the governor of Utah say that we need to put new workplace safety rules in place in mines.

He said he wants rules that are so effective that the rest of the world will adopt them.

Just one problem-- they already have those rules in a lot of the world.

Recently in Canada 72 potash miners were saved when they escaped fire and toxic smoke to  safe rooms stocked with oxygen, water, food and communications devices.

But in the US, such obvious and available safeguards are not in place.

In America, we're supposed to be rugged individuals, particularly in coal mines!

King Coal's only plan to make underground mining safer is to move it above ground -- by removing mountain tops.

That way communities won't have to worry about their coal miners being victimized by cave-ins.

Instead they'll simply bury the entire communities with displaced mountains.

King Coal has military might and he has unleashed it on the people who used to live in formerly beautiful mountain areas of the Appalachians.

Mountains that have stood for millions of years are being blown up so that we can burn the wrong fuel.

What's left behind is desolation. Mountain top removal mining  has wiped out tens of thousands of acres of trees and other plants and wildlife, further accelerating global warming.

This is even before we burn the particulate-laden coal.

All while we're promised a bright new future from the blessings bestowed upon us by kindly King Coal. Of coursewhat we really get are scars the size of mountain ranges and a poisoned atmosphere.

I say it's time we deposed this despotic monarch once and for all.