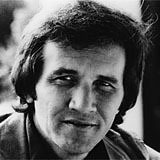 I'm headed out of town for a secret show biz meeting that came up at the last minute (this could mean good news for you, Ms. and Mr. Entertainment Consumer!). But before I go, let me say that God didn't make them little green footballs and Jeff Gannon wasn't at the White House on an outcall in the summertime.

What does that mean? It means my pals Dennis Perrin and Tom Duffy have apparently annoyed the wrong right-wing crackpots. Perrin annoyed the blowhard who runs the lintscreen for whackjobs that is Little Green Footballs (read his three most recent posts) and Duffy had the nerve to call a real male escort a fake reporter on the Garlic. Both actions provoked reactionary reactions. Pretty funny and I hope Dennis and Tom's replies hold you until tomorrow.