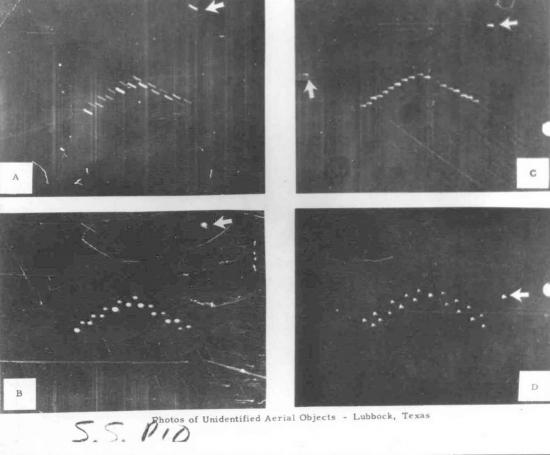 First Dennis Kucinich says he's for peace. Next he endorses single-payer health care. Now he's seeing UFO's. As an American humorist I'd be passing up a bonanza not to deride the Ohio congressman for being flaky. And yet I'll pass.

You see I'm flaky, too. I once saw a UFO or maybe even several of them My friend John Brown and I were looking up at the clear night sky when from south to north a geese-like formation of lights shot across the horizon at an incredible rate of speed. There were a few commercial jets flying east-west at the same time. Compared to the geese lights, the jets took an eternity to go make it across the sky. The lights traveled so quickly that it took John and I longer to simultaneously ask one another"did you see that?" than it took for the lights to come in and out of sight.

John reported what we saw to his family. I don't know if I even said anything to mine. We told a few of our friends and were mocked for it. A few weeks passed and the incident was fading. Then John called me and was he ever excited. His family LOOK or LIFE (I forget which magazine) had arrived  and it ran photographs of the most inexplicable UFO's. His mother spotted a photo that was exactly what we described. We were vindicated. After that things did die down. Neither of us became obsessed with UFO's: all we knew was we didn't know what we saw and that it sure traveled faster than anything man was putting in the sky in those days.

The experience has not caused me to blindly accept all claims of UFO's or to even become very interested in the arguments surrounding them. If you saw what I saw, you'd probably do the same. If what we saw was some sort of craft then we either saw one giant device or several smaller ones. Whatever it was was so far beyond my control that I just  hope that if it was an indication of alien intelligence then such intelligence is advanced enough to be beyond the petty need to dominate other living creatures. While I did have a healthy interest in the space program ,I never became any sort of UFO buff.  I have never watched a Star Wars movie or even sat through a full Star Trek show.

I don't  know what Dennis Kucinich saw. I do know that he emphasized that it was UNIDENTIFIED. That's exactly what I'd emphasize about what I saw. I also know that as an honest man Kucinich gave an honest and direct answer to a question. That alone probably makes him too crazy to be a leader in this country.

(NOTE: Contrary to popular myth, everything is not yet online. I searched and searched for the magazine story from the mid-Sixties. No luck. The picture I found  is of a UFO sighting called the "Lubbock Lights". They were photographed in Lubbock, Texas in 1951. They most closely resemble what John and I saw but the Lubbock lights were said to be colored. John and I saw bright white lights whoosh by.)