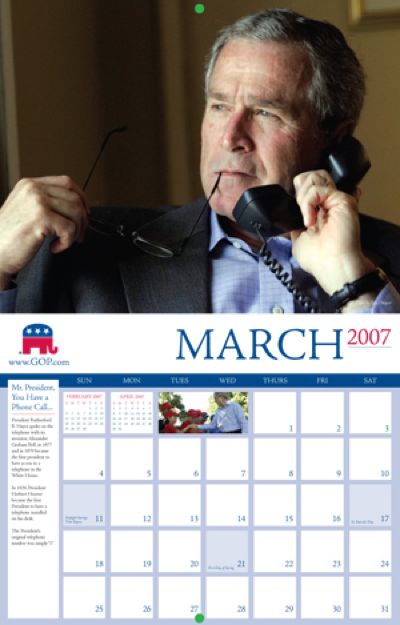 March 2007 -- just one of twelve months to be reviewed!
Alternate caption: Now why would they give me reading glasses?

I apologize for what will be sporadic posting over the next week or so because another year is begging for review. This means while you're traveling over rivers and through woods, I'll be sifting through another twelve months of war, mayhem, natural disasters, crimes against humanity and the environment and other assorted delights. My findings will be organized and commented upon in an upcoming Boston Phoenix piece.

In the meantime, here's a few lines you'd be wise not to repeat at the airport security check-in (more on that later).

In his new Newsweek column, Karl Rove wrote about how Republicans can beat Hillary Clinton. In the piece, Rove failed to mention George W. Bush by name. Some people think this is significant. I just think he has long been in the habit of not mentioning his fellow gangsters by name.

Rove never knows when he might be wiretapping himself.

Today's fun fact: The taser is now the third leading cause of global warming.

Trying to get news near a holiday is damned near impossible, unless of course you think it's news that people travel to visit other people at holidays. Around the clock, the cable news outlets are updating us on traffic, congestion approaching airports, the length of lines at airline kiosks and security checkpoints and the estimated time of delays before scheduled flights takeoff. And then they keep track of how many planes are in the air, not to mention baggage screw-ups, taxi, limo and mass transit availability They take all this info and then factor in current and projected weather  before reminding us that this is all part of post-9/11 Thanksgiving. Now that's journalism! There's an added benefit from this coverage--older relations who are waiting for us to arrive can freak out while watching this and then call us on our cells about 35 times while we're stuck at the various aforementioned obstacles.

If they covered war with even one percent of the thoroughness they employ reporting on holiday travel, friends and families of the troops would have gone to Washington and physically removed Bush and Cheney from office several years ago.

To CNN, getting in and out of O'Hare is daunting but war? Ehhh...

Despite having all hands on deck to cover developments at Annie's Pretzels at Hartsfield International Airport in Atlanta, CNN has managed to cover a few other things...

When teasing a story about  former presidential press secretary Scott McLellan's upcoming book (working title: Lying amongst the Liars), CNN anchor John Roberts lobbed this bombshell: Was President Bush in on a lie?

The real bombshell would be if they uncovered proof that the son of a bitch ever told the truth about anything, even once.

Like any good junkie Bush always lies because it would throw off his rhythm to ever be truthful about anything.

This story did fit well with the other bombshell this morning: Many Americans Traveling Today

In today's NYT, Tom Friedman has renewed his Iraqi Optimist Club membership with a matter of fact allowance that the 'surge' has succeeded because, by some statistical measures, violence has decreased a bit in Iraq. This despite the facts that violence has been on the upswing of late and when hundreds of thousands are dead and many neighborhoods are abandoned or ethnically cleansed and rearranged, violence has done phase one of its job. Nevertheless  indelible battle-lines have been drawn. He thinks this is all fine, in fact he's enthusiastic about it. He just can't figure out why Condoleeza Rice isn't over there, finalizing the deal and securing George W. Bush's 'legacy.'

To Friedman, the surge has been a unquestioned success but Bush's legacy is still a matter of doubt. And he has a column in the New York Times!

If Bush is remembered as a anything but an atrocity of a president it will be because of the political mind control he instituted while pieces of shit like Thomas L. Friedman distracted us by cheering him on. It will be an indication that free speech died while criminally complicit and/or inept journalists like Friedman kept us busy pretending that the big question of the day was how to erect the next story of a house of cards.

I'm not linking to Friedman latest nonsense because you know how to find him, just google 'preposterously pompous hack.'

So the surge was swell but it needs to be followed by diplomacy, eh, Tom?

Friedman actually thinks he's breaking ground with the suggestion of diplomacy. Nothing has ever been considered before this blowhard brings it up, just ask him.

If this war ever ends and terms are negotiated by diplomats, we'll be obliged to purse our lips, nod our heads up and down and say to ourselves. "Just as Tom said, diplomacy was needed! That guy knows EVERYTHING!"

Everything except how to keep me from regurgitating when I read his tripe.