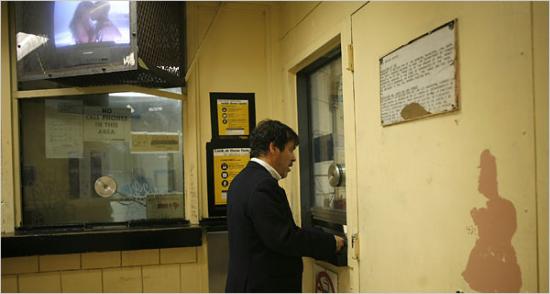 Randy Credico is the finest political impressionist I've ever known (or known of). Better yet, his politics are as impeccable as his impressions. Best of all, rather than rest on his show biz laurels, Randy has always been a devoted activist.

During the dark days of death squad diplomacy, Credico spent more time in Nicaragua than Ronald Reagan spent in the Oval Office. Back home in New York City, he became close friends with the great attorney William Kunstler. After Bill died, Randy carried on the fight for justice. He helped found the William Moses Kunstler Fund For Racial Justice.As the fund's director he has breathed life into it as a tireless advocate for victims of the police/prison-industrial state.

Randy's spent over a decade fighting New York's worst-in-the-country drug laws. Better known as the Rockefeller Drug Laws (so-named for then Governor Nelson Rockefeller), the statutes call for mandatory, inflexible and cruelly unusual sentences for drug offenders. They've been used to ethnically cleanse the state's cities. They've made prisons as ubiquitous as cow pastures throughout New York's rural areas. Recently, thanks largely to Credico, some prisoners have had their sentences reduced.

Mr. Credico has taken the cause beyond the Empire State, notably to Texas where he drew the world's attention to the small town of Tulia. In Tulia, despite a paucity of mass transit, dozens of poor black people were railroaded on phony drug charges. Thanks to the efforts of Credico and others, the innocents have been released from unjust imprisonment and a crooked cop is under investigation.

Most recently Randy has been fighting for the release of Shawn Kovell. She's the girlfriend of Robert Chambers, the notorious preppy killer who ended the life of a young woman 20 years ago in Central Park during what he described as 'rough sex.' Just knowing her choice of companions is to understand what little self-esteem this woman possesses. After serving his prison term, preppy Chambers didn't go to college, instead he graduated to a life of hard-core drug abuse. In the process he became a high value target for New York police. As a despised killer, notorious for getting off with a light sentence, the cops knew busting Chambers would bring plenty of publicity. They worked for months to build a case. Since he only dealt enough to keep himself in drugs, he normally wouldn't merit a blip on drug-trafficking radar -- except for perhaps who he could lead to. But when the bust finally came, they didn't want Chambers' supplier or his supplier's supplier. Who they wanted was the preppy killer and his hopelessly addicted girlfriend. Most of all they wanted the headlines the arrest provided. Credico saw this publicity stunt of a bust and realized that Kovell was in particular need of treatment and not detainment in the barbarous confines of Rikers Island. Ever a showman, Randy decided to beat the Big Apple's police/prison-industrial complex at its own game. If the whole world was watching, why not focus its eyes on the cruelty of drug laws? At first he tried to work with Kovell's court-appointed attorney but eventually decided to bail out the addicted woman himself. He also arranged to get her into a treatment program. There was just one problem:lead prosecutor Dan Rather Jr.(that's right!) didn't want Credico to bail out Kovell. Rather used the full force of the police state in an attempt to intimidate the crusading comic into withdrawing the bail money. Who was he to bail out this woman? And where did his money come from? We want to see his tax returns!!

This was a comical attempt by the DA's office to imply that Randy's money comes from drugs. Let me assure everyone that Randy Credico is not a drug dealer. He does have drug problem in his past and when he had the problem, he never had any money. I know. I was there, NOT doing cocaine with him. So I remember. If he had any involvement with drugs today, I promise you he wouldn't be bailing out the dealer's girlfriend, he'd be freeing the dealer. Except he wouldn't because he wouldn't have any money if he was still doing drugs. Anyway, Randy stopped doing cocaine and had an epiphany. He realized he could be sitting in jail next to any number of poor souls also guilty of the heinous crime of human frailty. His work with the Kunstler Fund soon followed.

When you think of it, what's silliest of all about this is the attempt to imply Credico may be the supplier that the police didn't bother to track down. They wanted Chambers and Kovell and that's who they got. Considering the amount of scrutiny they put into his case, you think they don't know who is up the drug chain from Chambers? And yet they use the question of who was supplying Chambers to impugn Credico. What a scummy joke!

Undaunted by this ridiculous attempt at intimidation, Credico explained in open court that, unlike this unconstitutional attempt to scare him away from exercising his rights as an American citizen, his money was legitimate. A hearing on Friday failed to reach a decision on the matter. Today (Wednesday), Randy will be back in court, fighting to get a sick person out of jail and into treatment. It's a story worthy of our attention. It's a cause worthy of our support. This country's need to first and foremost punish reaches into all of our lives. Even if we don't know anyone directly caught up in this madness, we're all victims of the misappropriation of our collective resources. The cost of the attempted imposition of puritanical conduct upon a nation full of people who see no answer but overmedication has become too much to bear. We must break our addiction to draconian retribution against people who have already harmed themselves.

If Shawn Kovell were your sister, would you want her jonesing in a jail cell or getting medical treatment for withdrawal? Well Randy Credico sees her as a sister and is putting his money where his heart is. He's gambling serious dough to give this woman a chance. He's also parlaying that bet with another wager  -- this one on his fellow citizens. He hopes we'll all examine a oppressive system that has  gotten so out of control that it would rather try a person who posts bail than free a person for the legally posted sum. Counselor Kunstler would be so proud!

UNRELATED NOTE: I apologize for the scarcity of activity on these pages as of late. I have some sort of muscle problem in my back and neck and they have me on muscle relaxers that knock me out. Also, I am pretty much reduced to typing left-handed and I'm not a southpaw so there are probably more typos than usual. My apologies.