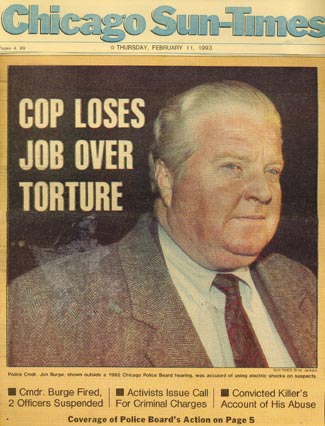 Jon Burge at the end of his public service

There was a mass murder in Wisconsin last month and what have we heard about it lately? Nothing.

This killer was a cop and a half. Full-time county sheriff, part-time in the town of Crandon, Wi, where he killed himself after massacring six people and wounding a seventh victim. He then visited family members and traveled around the small town for several hours before finally shooting himself. That part of the story barely got out. The rest of it and came and went in a few news cycles. (NOTE: I do not use the names of mass murders unless they are well known politicians or business leaders)

If this represents a new corporate media sense of proportion concerning sensational murders, I want to encourage it. Focusing on aberrant acts of violence promotes a reactionary view of the world. It makes it easier for people to call for more "safeguards" that in fact do nothing but tear down the protections all citizens need from intrusive examination and harassment by a paranoid, power-clutching government.  It also leads more nitwits to gun shops.

Fixation on violent stories leads to outcries for more crackdowns on criminals, stiffer sentences and more police on the street. This in a country that already puts more people away per capita than any other nation in the world. The USA has 5% of the world's population but 25% of its incarcerated populace. And yet it's a rare day when you don't hear some blowhard screaming about how we need to get tougher on crime. No one ever seems to mention that in a country where we teach kids "lessons" by sending them to prison, it's sort of natural that they graduate into lives of crime.

Th media'sschewing sensationalism concerning the Wisconsin killer is in all likelihood the result of a desire not to assail a growing police state. For the media to zoom in on the killer's profession would be to screw up the larger narrative -- the one where in a post 9/11 world ,the words 'cop' and 'hero' are interchangeable. And so a month later, the story of the Crandon mass murder has evaporated.

Now another police officer, this time in Chicago, is under scrutiny for having a missing wife. The same cop's second-to-last wife (he's had five) drowned in a bathtub. Hmm. In the coverage of the Windy City cop, not once have I seen a mention of the Wisconsin massacre, which was committed by a cop insane with jealousy over an ex-girlfriend. All reports indicate that this new suspected murderer was behaving in an insanely jealous fashion towards his now-missing wife prior to her disappearance. In this age of over-analysis of every crime of passion, how come no one is drawing any parallels? Jealous men are control freaks. Gosh, what a surprise that some of them are choosing law enforcement as a career!

According to a 2003 story, domestic violence is at least twice as likely in police officers' homes than in the rest of society. Some reports suggest that the ratio is 4:1. After former Tacoma police chief David Brame murdered his ex-wife in 2003 the Seattle Post-Intelligencer put together a comprehensive look at the epidemic of police-perpetrated domestic violence. It's a rare and candid examination in modern mainstream media.

If we're truly respectful of the law then we must apply it to the police. If we submissively urinate on ourselves at the mere mention of law enforcement, we aren't likely to do our duties as citizens. Those duties include making sure that those who wear the badge are honest and fair and play by the same rules as the rest of us. I'm not even asking for them to answer to the higher standard to which they supposedly hearken, just that they're held as accountable to the rule of law as civilians. Further, I expect the media to apply this fair standard to stories about unlawful cops.

Over the last month, scores of editors and producers decided to let the massacre in Crandon, Wisconsin disappear just like they let the massacres of tens of thousands of Iraqis vanish over the last 50 months. Neither story fits well with their perpetual mythologizing of America as a lawful nation, full of uniformed heroes. And so these unpleasant events aren't covered so more space and airtime can be devoted to harrying post-adolescent actors and singers with substance abuse problems. Well here's a bulletin for you: Nation Has More To Fear From Lawless Cops than Lindsay Lohan and Her Suspended Driver's License!

It's a rare moment when a ubiquitous pop culture story is actually relevant. Such was the case last week when Duane "Dog" Chapman, television's best known bounty hunter (regrettably there are several), was exposed as a flat-out racist by his son, Tucker Chapman. 'Dog' was upset with Tucker for his involvement with an African-American woman. He made this clear in a voicemail outburst that called to mind Michael Richards' verbal cross-burning at Los Angeles' odious Laugh Factory.

The reason the Chapman case is relevant isn't because an ex-con, mulleto (half man/half haircut) is a racist, it's the fact that he's a bounty hunter who regularly rounds up people of color. And he does it not only for the price on people's heads but for the entertainment of the American people on his show on the cable Arts & Entertainment Network. People who sit back and watch and cheer as this agony drags out before them are serving self-imposed life sentences of ignorance. After growing up in such a mercenary environment, is it any shock that Tucker collected a National Enquirer Bounty on dear old Dog? Some have come to Chapman's defense, saying that the remarks he made were a private matter. Yeah sort of like bounty hunting. Even at a time when A&E needs all the scab reality programming it can find, it cannot return this racist jamoke to its lineup. What it should do is make public every inch of videotape ever shot of Dog and his goon squad. I'm just guessing we'd learn that voicemail isn't the only place Chapman carpets with "N" bombs.

There are a lot of victims deserving of our sympathy: the young people savagely murdered by the cop in Wisconsin, the Iraqi people, the missing wife of the Chicago cop, the friends and families of all these victims and one more group (among countless others) -- an inestimable number of black criminal suspects in Chicago who were subjected to the kind of interrogation only an attorney general candidate wouldn't denounce.

Haven't heard about it? You can't be blamed. Let's go back to Google News: "Chicago cop missing wife" garners 204 stories. "Chicago Police torture scandal" yields six links. That's pitiful, providing you have a grasp on what's come to light in Chicago. Over 200 mostly black suspects were subjected to genital- shocks, interrogation while their heads were hooded along with the garden variety police physical assaults (beatings). One suspect even had a cocked shotgun stuck in his mouth. When he still wouldn't confess to a murder he had not committed, the trigger was pulled. The gun wasn't loaded but the trauma was enough to get a confession. For an overview of this, check out the compilation from the Chicago Reader's website.

Now let's try a Google news search on "Jon Burge." 70 links. That's a little better but nowhere near the response for one missing woman. Burge commanded the unit that conducted this torture/interrogation/railroad. Current Chicago Mayor Junior Daley was working as Cook County's #1 prosecutor when this heinous scandal was brought to him in 1982. He ignored Burge's den of thuggery until the statute of limitations ran out. He continued to prosecute the poor souls who had confessed to crimes under extreme duress. Hey, a conviction's a conviction! At least when you don't have any.

When DNA evidence began clearing some wrongfully convicted men in murder cases, the pot was brought back to a slow boil. Now there are calls for new federal charges against all involved. In the meantime, the city of Chicago has spent ten million dollars in legal fees defending Burge and his henchmen. According to the Chicago Sun-Times in a roundup on the costliness of Chicago corruption:
JON BURGE -- More than $10 million in legal fees have already been spent to defend the former Area 2 commander and his cohorts against charges they tortured criminal suspects for decades while police brass looked the other way. The city is on the brink of a settlement with three men allegedly coerced into murder confessions. The settlement is expected to duplicate or exceed the $14.8 million tentative deal reached last fall. Two other torture victims are still attempting to negotiate with the city.

So screw Dog the Bounty Hunter, the bastard child of the cult of personality and the police state. He's done. What we need to worry about is Illinois Congressman Bobby Rush's righteous demand for a federal investigation of the Burge affair. We should all support this call for justice -- especially cops who still believe their job is to "serve and protect."