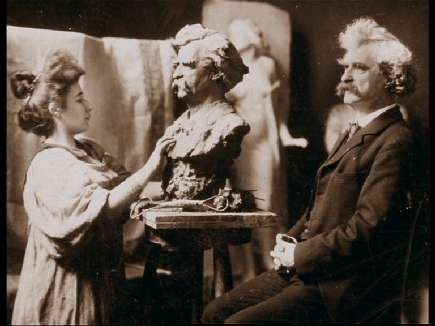 Hold that pose, Mr. Clemens, this is for posterity.


Had Mark Twain somehow beaten the reaper, he'd be 172 today.... and more annoyed than ever with the damned human race. There's no better or more thorough examination of the great author's work, life and times than the astute R. Kent Rassmussen's Critical Companion to Mark Twain: A Literary Reference to His Life and Work (2007 Facts on File). This two volume edition expands upon Rassmussen's already phenomenal Mark Twain A to Z>,  a book I praised in the Cleveland Plain Dealer Sunday Magazine in 1996. Some months later I was surprised to see my remarks excerpted and used as a blurb on the paperback edition. A-to-Z is still extremely valuable and can be found at a much more approachable price than the $112.50 Critical Companion lists for on Facts on File's website. Still, when you consider all the work it contains and the insight and wit it represents, it's a bargain. Speaking of the Cleveland Plain Dealer, in Truth and Justice for Fun and Profit old pal Michael Heaton offers  a new collection that features several stories he's reported in the best tradition of journalism No fake balance, just the facts as he find them. The results are on the level, not to mention terrific reading  If Michael Heaton were anyone but Michael Heaton, he'd be hard-bitten but he's full of what Twain called secret kindness" -- so full of it, that  his kindness and decency are open secrets to his reader. He also writes the hell out of a story. With a nose for news and a beat that includes everywhere from backstage to back alleys, Mikey writes about crumbling Cleveland in such a way that makes you almost want to visit the place or even continue to live there. Mike has apprised me about this project's progress for several months and I can't believe how much work goes into putting some jokes and funny images on golf balls. It's paying off -- Mike's balls are moving briskly. Perhaps I could have put that better? Anyway, these sleeves will fit well in any duffer's stocking.

One of the coolest and most successful underground performance spaces in the country is Paul Kozlowski's Fake Gallery in Los Angeles. On Saturday. December 1 the Fake celebrates its tenth anniversary with a gala party and auction of Koz's quirky, coy and clever art. This is the place to be to see Hollywood at its relaxed best. The FAKE derives its name from Paul's joking assessment of his art pieces, which include hilarious fake product art, a brilliant array of 'color charts' featuring shades of the artist's inventive humor and the lost home run series-- commemorations including baseballs Koz found in a forest beyond the fence of the upstate New York Cortland State University ball diamond. The Fake is a place where the greats, near-greats and ingrates meet to conspire, perform and commiserate. Tom Kenny will be the auctioneer so if you're in LA, why not go out and but some art from Spongebob himself? There are all kinds of people in show business. Some of them are wonderful.

OK, now that we've cleared that up.... they're playing in the Boston area this weekend and in Portland, Maine next Thursday. If you have a chance to get to any of these shows, you'll be sorry if you don't take it. Jim and I have done a number of shows lately with him performing solo and he's so great that he makes you forget how amazing he is with his band. They perform with such easy grace and camaraderie that their amazing musical talents can almost get overlooked. Almost. Cantor's furious percussion and Flack's standout stand-up bass mix with Infantino's virtuoso guitar-playing to provide sensational music that is then augmented by some of the hippest, smartest, funniest lyrics ever composed. Great music. Great politics. Great fun.

Even if you're nowhere near New England, you can still join the Egomania. Their music is available via download from their site as is a whole bunch of other cool swag that they'll actually send you. Like all of the stuff above, it makes perfect Christmas gifts!

The dates and details for Jim's Big Ego's upcoming shows: