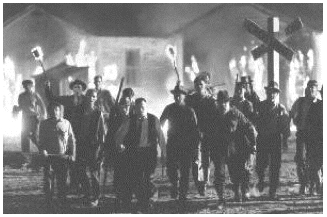 America's mayor-in-waiting, Michael Bloomberg, has put his manicured finger to our great unwashed wrist to take the national political pulse. According to the diminutive plutocrat, that pulse is faint but grows stronger at the idea of a new independent political party -- providing of course that that party is headed up by a trustworthy billionaire, like say... Michael Bloomberg. And providing that that party's board of directors (if you'll forgive an extremely apt term) is made up of previously noteworthy Republicans and Democrats.

Next Monday, Bloomberg will be in Oklahoma at the, um, center of a penthouse summit of self-proclaimed moderates. The guest list is full of former senators and other elite insiders. Participants will undoubtedly explore the idea of a new party. Leave it to billionaires and their minions to develop an invitation-only political party.

Now you might think the reason to throw such a party would be to bring in ideas from beyond the rather narrow spectrum provided by Republicans and Democrats. Rest assured, this is not the Bloomberg plan. He feels the gap between the two parties is too great. Political thought beyond the edge of the donkey and elephant herd that has trampled the little folks for lo these many eras is beyond anything his moderate soul can withstand.

The idea that the Republican Party with its interventionist, deficit-spending, Constitution-shredding policies no longer represents conservatives, doesn't concern Bloomberg or his summit-mounting cohorts. Such complaints only contribute to what they feel is a situation that's already far too divisive.
Such complaints should therefore be silenced.

Of even less worry to Bloomberg and the Summiteers is any political thought to the left of the Democratic Party (or even from the left of the Democratic Party). In Bloomberg's new party, those outraged by a government that serves the private interest filet mignon while dishing gruel (if anything at all) to the public good are out. Those disgusted by leaders who have suckled a police state from piglet to porker don't count. Those enraged by a foreign policy that's caused the USA to be looked upon by much of the world as the bane of humanity have no place at Bloomberg's priceless antique table. All while the rich have grown pornographically wealthier as the poor have been erased from even statistical consideration. After all, who needs such trouble makers around? They're always taking issue with things! How undemocratic can you get? There will be none of that in Bloomberg's Independent Wealth Party.

The upshot of the IWP's message: There is too much political discourse in America. Disagreement is unseemly and we are sick of it. Politicians must remember that they have something in common with one another because they are, for the most part, owned by the same immensely moneyed interests. The government is not there to debate issues, it's there to protect and prop up big business and to create ever greater advantage for the already over-privileged.

Bloomberg and his new power brokerage are mad as heck and they want the rest of us to cease and desist with all of our disagreeing. Dissent causes gridlock and nothing ruins a nice limo ride faster than gridlock. If we get disagreement out of politics then the important work of fleecing future generations for the benefit of deserving billionaires can continue apace.

Put Bloomberg's moneyed moderates in charge and no matter how you slice it, we'll still be served Democrats and Republicans who act quickly when their owner-operators bark but down-shift to glacial speed when it comes time to do anything that might actually benefit you or me. This call for moderation is coming at this moment because the big money fears the comeuppance it will face if the will of the vast majority of Americans is carried out as a result of this year's elections. The ugly mob out there is no longer blinded by the smoke of 9/11. It's sick of Republicans and Democrats. The Republicans hate We the People. We the People are the only group the Democrats don't seem to fear. Otherwise they'd have gone into D.C. this year and dragged Bush and his rat's nest of corrupt cronies into broad daylight to demonstrate once and for all why torture is wrong. Bloomberg's audacious suggestion that we need a hybrid of the two parties to save our nation is a nothing more than an emergency installation of moats around America's gated communities.

Most Americans now know we've been lied to, ripped off and supremely disrespected over the past several years. We want no-bullshit change and we want it yesterday. Bloomberg intends to redirect our anger toward the few pols who dare express our discontent in Washington. It's also meant to be directed at some who have gotten too bold and careless in their sacking of the Capital, but mostly the intent is to intimidate anyone who would raise his or her voice to speak the real will of the people. So the phony foes of gridlock are warning current candidates to tone down their rhetoric unless they want several billion bucks worth of influence peddlers tossing platinum monkey wrenches into the electoral machinery.

This Bloomberg ploy is nothing new. Whenever the power elite faces challenges and senses even a hint of ::gasp:: reform, its dollared denizens begin complaining about how potential reformers are guilty of a "lack of civility." How dare anyone scream in agony while they're trying to count their money?

If you want a new political party, great, -- so long as it's not founded by a billionaire who's looking to further protect the already crummy status quo of privatized politics. Such a movement would be best started in congressional districts where both parties have done poor jobs of responding to the dire circumstances of constituents. There's a good chance you live in just such a district. All a new party would have to do is figure out what the people need and promise to fight for it without ever selling out. Its candidates would need to promise to raise just the sort of ruckus that so annoys the Michael Bloombergs of this world. Once elected, they'd need to intentionally create gridlock so that the obscene waste of our precious resources, particularly our democracy, would not be permitted without unceremonious protest by true representatives of the people.

Note: I have added James Wolcott to my blogroll. Why? Because I'm neither an ingrate nor an idiot. I'm sure this is just the break Mr. Wolcott's been waiting for. But seriously, his blog is relentlessly on top of things, always funny and written with understated elegance. If you are among the few who don't read him regularly, stop cheating yourself.

And speaking of not being an ingrate, there's no doubt that Dennis Perrin led Mr. Wolcott my way. Thanks, pal!