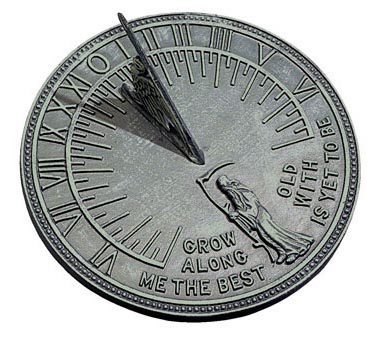 This is Father Time's day. As is the case with so many patriarchs, he's associated with oppression, depression and dread. No wonder millions of people will get hammered tonight.

Tomorrow his grim reminder of our common and inevitable mortality will be pushed aside with hopes for a better year ahead. This numerological confidence will wear off soon enough, especially since we're walking smack into the high holidays for all-things male-dominated, like the NFL playoffs. These contests will be analyzed and prognosticated to death by a glad-handing club full of regular guys who will boldly pronounce what's going to happen... until after the games when they'll imply that what actually did happen was so obvious an eventuality that they didn't want to insult us by mentioning it during the two hour pre-game show. And then they'll tell us with absolute surety what will happen in the next game.

The exact same scenario will unwind again and again during coverage and analysis of the race for that most patriarchal of positions -- the presidency of the United States. In fact it already has. Even with a woman candidate legitimately contending, it's still a search for our national dad. Hillary Clinton's gender exemption comes due to a legacy exemption provided by our former national dad, and her husband, Bill Clinton. Just to be safe, Clinton has gone out of her way to let the boys in the back rooms and front offices know that she's more than willing to nod, wink and approve of whatever it takes to keep their shiny red, white and blue corporate war machine in top running order. If taking millions in campaign support from them makes them more comfortable, who is she to refuse? Senator Clinton has behaved exactly like any genuine patriarch should. She's told us how this campaign will go -- that's her story and we're sticking to it. Or else! She started her run claiming she wanted to have a 'conversation with the American people.' As of this week she's not even taking planted questions anymore. Through her minions, she's told us that she's an unstoppable force, that she's inevitable, and that resistance is futile. Despite all this, lately she's looking like just another Midwestern patriarchal phony demanding that we ignore that person getting pants-suited behind the curtain.

If and when she fails to make Democrats believe that she's the only one who could possibly beat any of a comical array of candidates infesting the Republican field, the blathering know-it-all pundits will tell us that no one could have foreseen this shocking turn of events.

That's what they did when Bush's Iraq War/Occupation triumph unraveled like a bad retread on an 18-wheeler. Who could have foreseen this? Millions of people who weren't big enough sellouts to get gigs as talking heads, that's who, you self-important bullshit artists. Rgardless of their repeated failures, these blathering know-it-alls have supreme confidence in their ability to stampede the rest of us into doing whatever they say we will do.

So if we follow the script, starring Democratic Frontrunner Hillary Clinton, that's oppressed us throughout 2007, we're supposed to overlook the fact that she's been horrible on the war and is a conscience-free-trading, corporate-funded phony who is about as likable as the general manager a used car salesman brings out to coldly state, "If you walk away now,  I can't guarantee this gem will be on the lot later. Someone just called and is coming in to take a look in a few minutes and they'revery interested."

It's been a high pressure pitch from the jump with the junior senator from New York. Get behind her now or the Bush years will never end! Criticize her at the peril of blowing any chance we have in November 2008. And you women better get behind your sister, who will show those men that they're not the only ones capable of leading a nation in time of perpetual war.

Much to Clinton's dismay, Americans are getting up and walking out of her showroom. They're willing to keep looking rather than risk getting stuck paying for her for the next four years.

One prognosticator has been telling us for months that Mrs. Clinton is not inevitable. He's the same guy who called a Kerry victory in Iowa n 2004 when the Bay State senator had been pronounced dead by everyone else.  You will never see this soothsayer hanging around with talking heads, until they decide to set up a video link to Mexico because that's where he spends most of his time. His name is Al Giordano and as you should know by now, he's the founder of that critically important source of authentic journalism, Narco News. He's just started blogging on the upcoming election in The Field.  And he's outstanding in it! Al has consistently said Clinton is not a sure thing. I think he has a good sense of how America feels about her. He knows that the arrogant, almost dictatorial campaign she has run has agitated the grassroots into a serious growth spurt.  Early in the new year, we'll see just how right he is. But when it comes to prognosticators, the only one I'll bet on is  Al. The rest of them seem to only tell us what's going to happen because they're blind to what's already happened.

Is there anyone sillier than Wolf Blitzer? His CNN show, The Situation Room might as well be called Wolf's Secret, Magic, Lucky Clubhouse. On the screen below Blitzer, I half expect to see them superimpose "No Girls Allowed" (with the 's' in 'girls' backwards)  This ridiculous man's broadcast is full of 'strategy sessions,' breathless 'exclusives' and repeated admonitions to 'stand by.' What else are we going to do, Wolf? There isn't a chair anywhere in your conspicuously situated studio. Blitzer has the air of a man who never earned a game uniform in his life but is now a fanatical fantasy sports participant, with a closet full of replica jerseys. No one this side of Larry Craig does more to wear contrived machismo on his sleeve.

On the day of the Bhutto assassination, he was at his worst (well, he's always at his worst but I happened to watch that day.)
After a few dozen teases about information exclusive to the Situation Room!!, he finally revealed, "Benazir Bhutto felt if she were ever assassinated that Musharraf should be held accountable." No shit, Blitzer. I'd guessed as much the second I heard of the incident,  before it was announced that Ms. Bhutto had died. I surmised this even though I don't have the worldwide resources of CNN at my fingertips, let alone my own situation room, full of monitors and macho players who are self-proclaimed advisers and experts in manly things such as militarism and terrorism (redundancy noted). If I had such people wandering around my room, I'd offer them a seat, just to calm them down. Looming people get nervous. And I'd also never play Wolf's dildoically urgent theme music. I wouldn't be surprised if one of these days Blitzer and all his guests wore only loincloths and face paint.

We have to stop paying attention to clowns like Blitzer. I can't imagine how asinine he looks to people in other countries. Al Giordano can, which is why I'm sure he chortles whenever he hears Wolfy howl about Democratic Frontrunner Hillary Clinton.

Thanks so much for giving some of 2007 to reading my thoughts. I wish you a sincerely Happy New Year. And with that, I bid farewell to the last year our beloved boy Lloyd ever knew.