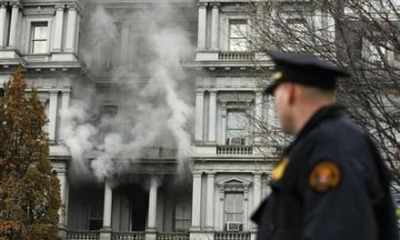 The historic Eisenhower Executive Office Building next door to the White House caught fire this morning.

Gosh, I wonder how long before we start hearing about how the administration would have happily turned over files pertaining to certain investigations, if only they hadn't been tragically lost in the fire.

The fire started not far from Dick Cheney's ceremonial office. Several goats near the altar suffered smoke inhalation but should recover in time for sacrifice.

The fire started in an electrical closet, an area where Republicans store their extramarital aids.

One security official was injured when he yelled "Fire" and Cheney shot him.

Fortunately most of the Bush-Cheney Administration have left their jobs to spend more time with their families or there could have been a lot more injuries.