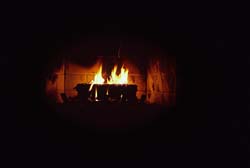 Last Friday I called my friend Dennis Perrin to discuss something.

I never got to it because when Dennis answered the phone, he immediately said, "Hi Barry. I can't talk to you."

His voice was low and flat but serious emotion lurked in it. He sounded like something was really wrong and that if he spoke even a little bit more loudly, he'd lose all control.

Dennis continued, "My sister-in-law Holly was killed at random by a gunman at a convenience store in Indianapolis."

And then he said something about Holly that I wish I could quote verbatim but the circumstances were so shocking that I wasn't remembering to remember. Anyway, in typical Dennis Perrin fashion he got to the essence of the matter in a modicum of words. He told me how special she was, how wonderful she was to her husband and son and everyone she met and how she had a rare grace and presence and that this was an unbelievable and devastating loss.

And then he said, "I have to get down there. I'll talk to you next week."

All I could do was stammer condolences and say goodbye.

And then I was left to think of Dennis and his family and especially his brother Jeff and Jeff Jr and their incredibly unfair loss. And then I thought of Holly Corey and how her life that she loved, appreciated, shared and made of value was stolen from her.

I went online to try to learn details and make some sense of things but it was a fool's errand. And then I just let the computer slip into sleep mode and go black. The sun was setting but I turned on no lights, just sat in the gloaming with the fireplace flickering and the puppies at my feet . I was wishing there was something, anything, I could do to take away even the tiniest amount of the pain that had to be overwhelming my friend and his people. But there was nothing to do but sit in the growing darkness, helpless in a world out of control.