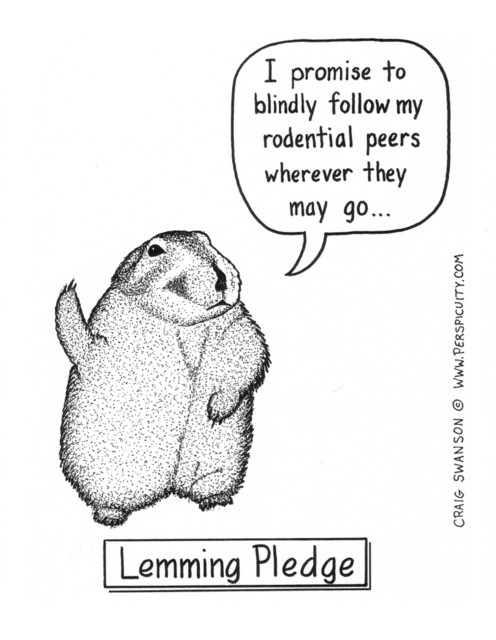 Typical oath employed by those consumed with the eternal search for a political leader.

They were flipping their wigs at the wingnut wingding (Conservative Political Action Conference) today.

Despite the absence of Larry Craig and a heavy police presence in the men's room, attendees appeared to enjoy themselves.

Mitt Romney used the occasion to announce that he's withdrawing from the presidential race, saying he was doing so, "Because I love America, in this time of war, I feel I now have to stand aside for our party and our country."

To Romney, there is something even more important than his megalomaniacal desire to run the world-- and that something is war.

What a classically chickenshit departure --- retreating under the cover of the flag while pushing the dubious story that much as he'd like to engineer a come-from-behind victory, his altruistic desire to keep the war going prohibited the continuation of his campaign.

So we're supposed to believe that Romney isn't getting out because he's had his ears pinned back by voters from coast-to-coast or because every time he had a make or break moment, he broke, no  the only reason he quit was because he's just so darned selflessly patriotic.

What's this country coming to when an extremely wealthy pretty boy, who tells everyone exactly what he thinks the want to hear, can't buy his way into office?

McCain addressed the right-wingers at the CPAC convention by promising to consider abandoning his run for president to instead focus on taking charge via coup d'etat.

Right-wingers have so much more respect for a leader wearing a sidearm.

In other words, they made a traditional appeal to self-loathing that resonates so deeply with  their core supporters.

Turning to the cruelly humorous... Romney's withdrawal leaves the state of Michigan with absolutely no voice at either major party convention this summer.

And this note to email correspondents -- sorry for my  failure to communicate. Just as I seemed to finally fight off the flu, I got taken down by a cold from central casting. At the moment, I'm too miserable to write anything pleasant.