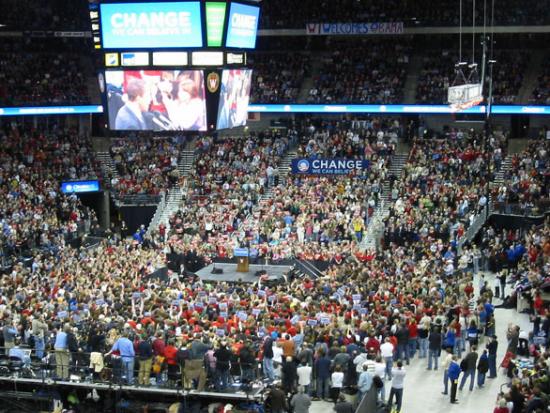 I don't know what Barack Obama's advisers are thinking. They've repeatedly let their candidate play right into Hillary Clinton's hands by allowing Obama to go out and win one contest after the next, without any regard for the consequences. Have they even once considered what the voters in the Texas and Ohio will think about the Illinois Senator's publicly conducting himself as if he's involved in some sort of national campaign? Do they think no one is watching?

Now Obama is on a self-destructive eight-state winning spree, apparently hellbent on committing political suicide. He's even heedlessly won caucus after caucus, when everyone knows winning caucuses is a complete waste of time anywhere but Nevada.

Last night, after three more reckless victories, do you know where Obama turned up? In Madison, Wisconsin! Three weeks to the day before the Ohio and Texas primaries  he goes to Madison! And why? Because the meaningless Wisconsin Primary is next week. Is there no adult supervision for this novice candidate?

Hillary Clinton, speaking in El Paso last night, sensibly ignored voters in Virginia, Maryland and the District of Columbia who, as coincidence would have it, said "El Paso" to her in yesterday's impertinent Potomac Primaries. She graciously sidestepped mentioning those contests in her remarks. She clearly hadn't done anything as gauche as make a 'congratulatory' phone call to Obama when he won the three electoral frivolities. You can't buy that kind of class -- which is fortunate because if you could, the Clinton campaign couldn't afford it. But I digress...

At Clinton's event in Texas, the audience was enthusiastic but left it to the candidate to hit the high note as she boasted of being 'tanned and rested'. It was an obvious dig at her opponent's foolhardy expenditures of precious energy on one meaningless victory speech after the next.

Senator Obama's highly-charged Madison rally only underscored the sensibility of Clinton's El Paso affair. The Obama mob seemed as deluded as their candidate, unleashing supersonic approval at every turn of his speech. They broke into chants of "Yes We Can" as they waved thousands of signs demanding "CHANGE." You could feel the place rumble just watching it on TV. When it ended, Obama left his audience so overexcited that no one wanted to leave.

One night of such misplaced excitement would be bad enough but it's been happening at rally after rally, in state after state. And not one of the rallies has been in Ohio and Texas! Does the Clinton-hating media ever so much as mention this? Of course not. It's hard to estimate how many energized supporters this runaway campaign has left behind. You have to feel for the poor suckers  who are sufficiently naive to believe winning again and again will be enough to propel Barack Obama to the 2008 Democratic Presidential nomination. Grow up!

Fortunately for Hillary Clinton, people in Texas and Ohio are not prone to getting swept away by political tidal waves. Her nomination was a foregone conclusion months ago and Ohioans and Texans are disgusted that voters in a series of unimportant states are trying to steal what Hillary Clinton has had coming to her for 35 years. They're upset that a candidate who is always talking about Day One of her presidency may instead get Day None because she has been relentlessly victimized by so-called 'election results.' Never fear, these folks will do something about it, three weeks from now when votes that count are finally counted.