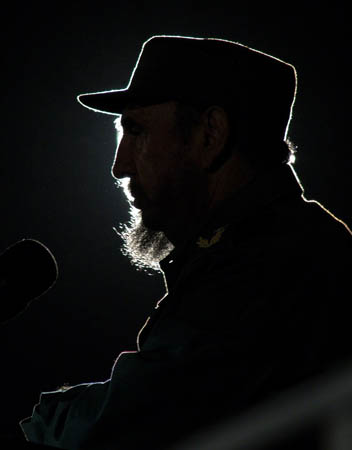 I'm pretty sure Castro will pass on the gold watch they're preparing for him in Langley, Va.

Wasn't it great how all the American pols responded to Castro's retirement as if it's up to them to choose his successor?

I didn't realize that Obama, Clinton, McCain and Huckabee are Cuban super delegates.

I'm sure the Cuban people are holding their breath waiting to hear what Mike Huckabee has to say.

If they were smart, they'd hire him as an adviser on health care and energy conservation. George W. Bush was the most obnoxious, not to mention impervious, American politician to comment on Castro hanging it up.

Speaking of post-Fidel Cuba, Bush said, "First step, of course, will be for people put in these prisons to be let out."

So Bush is closing Gitmo? That's quite a gesture!

"Eventually this transition ought to lead to free and fair elections.  And I mean free.  And I mean fair. Not these kind of staged elections that the Castro brothers try to foist off as being true democracy," he said.

No, Cubans deserve the kind of staged elections that Bush brothers foist as being true democracy.

Castro led Cuba for 49 years, which is exactly how long it seems like George W. Bush has been president.