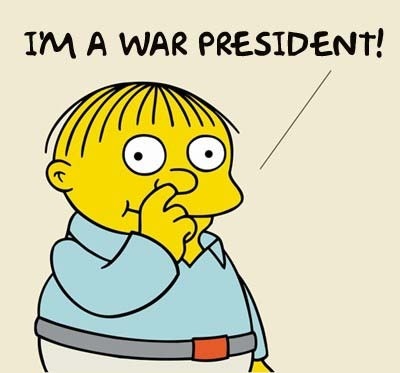 I've been busy reviewing some of my old work because someone requested some writing samples.Since it's taken me all day I figured I might as well post something I stumbled across. The following was written at a rather pivotal moment for all of us. It provides but a few examples the kind of stuff you can find if you forage around this website.

Bush is calling this "the first war of the 21st Century." It's reassuring to know we have another century of wars to look forward to.

They keep saying this was an assault on U.S. democracy. Good thing they didn't strike last year before the Supreme Court ruled it unconstitutional.

Stand behind the president? That's tough to do with a man who can retreat at the rate of half-a-continent per hour.

We're lucky he didn't end up in Canada.

Who's playing W, in the TV movie, Don Knotts?

Let me get this straight, they feared Air Force One and its escort of F-16 fighter jets would be taken down by a hijacked commercial plane, operated by pilots who had learned all they knew about flying from an Arabic copy of 757's For Dummies?

96 consecutive hours of TV coverage and speculation later and not one purported expert has suggested that perhaps U.S. foreign policy played some sort of role in this.

Announcing a War on Terrorism is akin to the British posting the formations they planned to have the Redcoats march in back in the 1770's.

The wars on the environment and working people have gone so well Bush just had to add terrorism to the list.

This War on Terrorism will give the Drug War company over the next several hundred years of futility.

Many people feel that Manhattan will now become a police state. Many people haven't been in Manhattan during the Giuliani Administration.

The US will do whatever it takes to preserve our freedom-- even if it has to forcibly take a DNA sample from every single citizen in the nation to do it.

If airlines get the $15 billion congress is dangling perhaps they should put some of it toward making sure that airport security personnel get an across-the-board raise to $6 an hour.

You have to figure Gary Condit is experiencing some mixed emotions over his demotion from the front page.

I don't want to say the country has gotten too jingoistic but K-TEL just released a dance mix of Irving Berlin tunes.

Give Bush credit, not everyone can get away with issuing a declaration of war against "we'll get back to you later with the name."

"We will rid the world of the evil- doers" said Court-appointed President Bush, always a big fan of Underdog.

They wheeled out  Henry Kissinger to declare that the attacks weren't the result of a failure of U.S. Intelligence. He really should have warmed up with a smaller lie after all that time on the sidelines. He could have pulled something.

Kissinger had been in failing health but the prospect of an intractable war perked him right up.

In a conciliatory gesture, the Taliban has offered to meet with an old political ally, Ronald Reagan, to see if some sort of agreement can be reached.

One thing's for certain, even if oil becomes scarce, gasbags will remain in plentiful supply in the United States. Is there anything more American than flag price-gouging?

The truth will set you free but in most cases it encumbers the hell out of you long before it ever unlocks the guardhouse.

Is it time to reconsider what our economy is all about when it hinges on people spending money they don't have, on things they don't need?

How vapid is a society when it is reduced to believing that a trip to the mall is a patriotic act?

If you really want to annoy the Taliban airdrop elementary school teachers into Afghanistan and have them teach science -- to girls.

Thursday night CBS debuts The Agency, a drama about the Central Intelligence Agency. It promises to be the most sympathetic look at big-time international drug dealers and terrorists ever to appear on network primetime.

The Air Line Pilots Association is pressing for federal legislation that would allow pilots to carry firearms, particularly when negotiating with airline executives.

The Federal Aviation Administration grounded crop-dusting planes in fear that they may be seized by terrorists to spray biological and chemical weapons on urban areas. The FAA promises that planes will be back poisoning the food supply in a matter of days.

Give Rudy Giuliani credit, when martial law is declared the man is a wonder to behold. We've been told the terrorist attacks were an assault on democracy. If Rudy chooses to attempt to circumvent NYC's term limit rule, wouldn't that make him an accessory after the fact?

If there was anyone who didn't fear America before polls showed a 90% approval rating for George W. Bush, they certainly must be feeling some trepidation now.

MSNBC ran a report on its website detailing how House Judiciary Committee Republicans ordered C-SPAN's and other news organizations' cameras from a hearing after John Ashcroft testified in favor of the oppressive anti-terrorist bill but before several witnesses opposed to the bill could have their testimony given equal coverage. Then, a few hours later, the section of the story that detailed this undemocratic act suddenly disappeared from MSNBC's site. So it appears MSNBC's website has been seized by House Republicans.

The Anti-Terrorist bill is an Anti-Bill of Rights Terror.

American Airlines has announced that it won't give severance packages to thousands of laid off workers. When asked how an airline, about to receive huge amounts of federal money, could put workers on the street without paying them what was rightfully theirs, a spokesperson said "Because exploiting a crisis to screw workers is the American way."

Cantor Fitzgerald chairman Howard W. Lutnic promised to immediately attend to issues caused by the deaths of nearly 70% of the bond-trading firms staff in the september 11 terrorist attacks on the World Trade Center. True to his word, the firm acted swiftly -- by September 15 all of the deceased employees were removed from the company payroll.