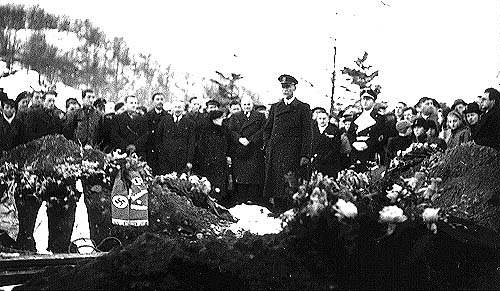 I was just beginning to organize my thoughts on the lately late William F. Buckley when I remembered that Dennis Perrin had finished his book Savage Mules and is back to regularly posting on his blog. A quick check revealed that Perrin had already buried the founder of the National Review in a few long tons of Buckley's own chickenshit.

I called Dennis to express my appreciation and he asked if I'd seen Robert Sherrill's 1988 NATION review of John Judis's William F. Buckley Jr.: Patron Saint of the Conservatives. I allowed that I may well have read it but it would have been sometime in the vicinity of, oh, 1988. Perrin told me to watch my email and he sent me a PDF. The review, much like Perrin's upcoming book, is a timely treasure. It was sent along to everyone's favorite Red State Son by his friend Lou Proyect.

In the NATION piece, Sherrill presciently noted that Buckley had, for all intents and purposes, passed away decades ago. Since WFB did nothing worthy of note in the final 20 years of his life,  the review is essential reading today -- especially since today everyone from the hard right (fascists) to the gooey center (liberals) is lionizing the little fink that was William F. Buckley Jr.

Buckley obfuscated his shallow philosophy with excess verbiage that when removed, left nothing but a simpering, bigoted fraud of a man. He walked in his father's goose-steps until he came of age during McCarthyism. He remained a practitioner of Tailgunner Joe's impatient fear-mongering and character assassination throughout his inexcusable public life. He used his odious publication as a front for feds and spooks and as a safe haven for every virulent strain of bacteria in the reactionary Petri dish. Now that he's gone, if the American Right wants to honor an office boy for Joseph McCarthy as its intellectual patriarch, I say congratulations for finally doing something honest.

Thanks to Perrin and Sherrill all  I have to do is suggest we throw a keg party at Buckley's grave when the weather improves.

NOTE:You have to click through to the blog page to download the
PDF file that contains Sherrill's review from 6/88.