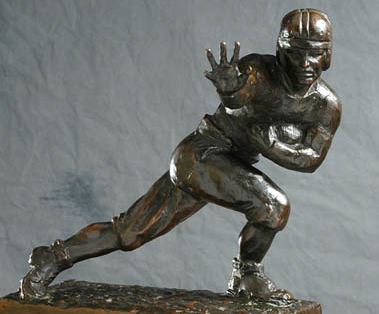 I apologize for using this space to too often grouse about various maladies. This of course means you're about to hear about another one.

A few weeks ago I made the mistake of thinking, "at least my back has been pretty good lately." Rest assured, the karmic debt accrued for brazenly taunting the sacred keepers of the sacroiliac is being repaid , with interest compounded hourly, by yours truly.

Today I finally found a way to mitigate spasms capable of tilting the Richter Scale. Unfortunately it requires lying in a position that's almost identical to the pose immortalized by the Heisman Trophy -- except I must strike it on my side, on the floor, rather than on my feet, headed for paydirt and glory. Needless to state, it's rather difficult to type with a straight-arm.

Much as I appreciate your kind urges to suggest cures, as a 30 vet of the Battle of the Back, I probably know most of what you have to suggest. So unless your idea includes the phone number of a pharmacy in Afghanistan that delivers, thanks just the same (and by the way, Mexican apothecaries are fine, too.) I'll get through this because, as the old and cruel joke goes: you can't die from a bad back, it's not that easy.