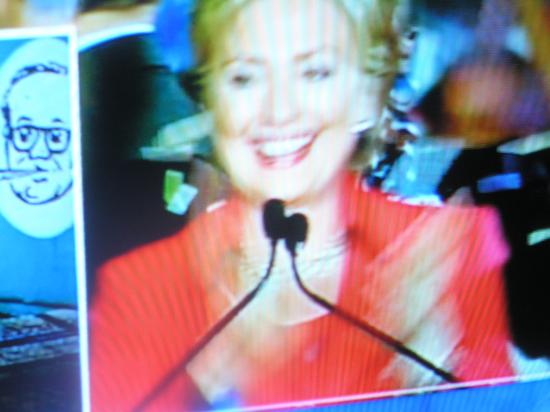 Preface: it should be obvious by now that I have no respect for the Clintons. None

Why? They took an already weak political party and sold it (OK, remaindered it) to the corporate bosses.

Hillary Clinton has taken more money from the enemies of peace and prosperity for average people than any other 2008 presidential candidate. Period.

Her finance chief is the criminal Terry McAuliffe.

She looks upon the presidency as if it should be hers as a perquisite for keeping her mouth shut about her husband's cheesy conduct.

That husband has risen in stature because he was replaced by a braying, criminal jagoff. Now there's an accomplishment!

She promises to revitalize Rush Limbaugh and an array of reactionary blowhards by reinvigorating an ancient feud that will resume on so many fronts that there will be no way to avert our gaze from it. Our nostrils won't be spared, either. It's no surprise that Limbaugh is urging Republicans to cross primary lines to vote for her.

She runs as a feminist on the basis of her gender, even though anyone even remotely politically literate understands that she is a tool of the patriarchy. War machine = patriarchy.

And so I find candidate Clinton to be contemptible. This doesn't mean that I am some naive foundling on the Obama doorstep. I'd just like to see him end Clinton's run for president. That summarizes my excitement concerning the Senator from Illinois.

As goes Ohio, so goes the nation. And Ohio went all over the nation last night. Right in its face.

Ohio went last night and with it went hopes to finally bid farewell to the most overrated political family in America. (Beat the Bushes all you like but Dubyahoo's abysmal approval rating does not belie unimaginable popularity)

And last night we couldn't completely cut the tunnel-visioned eyes of Texas out of our rotting national sack of potatoes.

So a Clinton campaign that literally described its strategy as 'kitchen sink,' because that phrase sounds better than 'shamelessly unprincipled desperation,' employed everything from Bush-Cheney-style fear-mongering to endorsing the presumptive Republican nominee and won behind (or beneath) these tactics.

So, at least for last night, all you can do is say more (greed for) power to Hillary Clinton.

Except of course for one minor thing -- she didn't win by enough to cut the delegate deficit by any significant amount. This is because Barack Obama, a man who has no choice but to play a much cleaner game than his opponent, has put together a campaign that has studied the rules in each state and has learned how to maximize wins and minimize losses --- by following those rules.

When he does this the Clinton campaign inevitably cries foul.

Even when Obama sticks assiduously to the high road through our nation's flatlands, some will say, "He's too nice, I don't trust him." So Clinton held in the clinches, rabbit punched, bit ear lobes, kept fighting after the bell and brought in a team of sharp-shooting character assassins to assault an opponent who has no choice but to play fair and square or get called 'uppity.'  When these tactics paid off, the pundit peanut gallery predictably praised Clinton for being savvy and resilient.

Of course the pundits, as is their job, missed a rather huge part of the story: it takes more resilience to be hit by a barrage of kitchen sinks and then come out and graciously congratulate your opponent, than it does to place porcelain in your boxing gloves and aim them crotchward.

Given a choice between a freshened start and 'experience' that includes corporate lawyering, Wal-Mart board-sitting and vital supervision at several Christmas tree lighting ceremonies, Buckeyes and Texans chose the latter.
"Yes she will" won over "Yes we can." Had Clinton lost Texas and Ohio, she'd have sent out her operatives to tell us that they don't matter. But they do. They always count in this country and when they are counted, the national average is usually lowered.

While Hillary's husband was president, entire towns were destroyed in Ohio by union-busting corporations (in particular AK Steel). The Clinton Administration did nothing but ring in each New Year walking the beaches of a resort with the jackbooted captains of industry. But Ohio union households went out and voted for her last night. That's pitiful.

So she won last night and did it in classic American fashion. She played on the chumps' fears and it worked.

She bullied the media and it rolled over. Can you imagine doing negative stories about a campaign simply because it lost eleven straight caucuses and primaries by double digits?

The campaign is far from over and we can now see just what Obama is made of. He is at a disadvantage because in a fair circumstance, he'd call out Hillary Clinton and question her ethics. Unfortunately he's in the USA, a country where not long ago, black men were lynched for looking at white women, let alone challenging their virtue and authority. But still, he has plenty of dough, that's spent prudently facilitating a very strong national organization. The key is to keep  Mr. Obama's youthful base excited and engaged.

And this big state stuff is silly. The Dems will win NY, California, Illinois and Michigan. They will lose Texas. Florida and Ohio will hinge on shifty vote counting practices (but at least Jeb Bush is gone in Fla. and a marginal Dem is now the governor of Ohio.> Relatively large states like New Jersey and Massachusetts will be overrun by donkeys. The D's have a chance in Virginia and even a few more southern states. Crucial Missouri is up for grabs, for either Dem. In short, Obama would win anywhere Clinton wins and win in some places where she wouldn't.

Clinton's despised by about half of everyone so she has to run a perfect campaign to win this fall. Obama will lose something to racism but if the racists tip their hand (and when don't they?) it can be turned to his advantage.

In any case, McCain is frail, doddering and really quite dim so panicking about him wrapping up the R nomination is silly.

Because if McCain goes and sits down, he may not be able to get up again.

The best thing to happen to Obama last night was the sequence of events. Clinton spoke after McCain. Only meth freaks can stay awake during one of Whispering Johnny's speeches.

McCain's oratory is inane. Last night he had sheer terror in his eyes when was reading his speech off the teleprompter. At times it sped up and he sped up. You could almost hear the guffaws from the control room. He turned his head but his eyes stayed fixed on the scrolling text.

That the remarks were prepared was the only thing that made them noteworthy because it made you realize, "Holy shit, he planned this blather!"

Friends, we must respectfully discuss our bloodlust.

His speeches sound like a bad local car dealer ad. He calls us all "friends" again and again. And then he asks his "friends" to help him bring glory to our nation with "victory" in a total blunder of a war.

Excuse me, Mr. Hoarse Whisperer, but people who ask me to sign off on indiscriminate carnage are not my friends.

And he's now trying to dismiss Obama's questioning the phony premises for the needless and insane war in Iraq by calling such questions "an old argument.' He then tells us we don't have time for old arguments.

Well how about the five year-old needless argument in Iraq?

The way McCain's looking, he doesn't have time for much of anything. To paraphrase Casey Stengel, "When  McCain's father was  Whispering Johnny's age, he was dead."

Panicking over McCain is something I can't quite get around to at this point. Today he gets the French kiss of death by way of an endorsement from George W. Bush. That's just taunting fate for a man in his condition. Clinton now has to decide whether she should go negative for the next three months. It worked in Ohio and she scraped by with it in Texas but she is still losing. To win, she has shown that she's willing to drive off boatloads of new Dem voters -- that loud clunk you heard last night was the sound of the kitchen sink hitting lots of young voters. Some party loyalist!

To make her candidacy seem viable, Clinton has also told huge portions of the country (where she has lost) that they just don't matter. But they do -- especially to the Democrats in those states. A Dem prez candidate who does just a few points better in the flyover states could help candidates for the House and Senate. But working majorities don't matter to corporate Dems because corporate Dems have to work with the allies of their masters. And those Republican allies of their masters are happy to sign off on horsehit like conscience-free trade and scapegoating of the poor. And of course there will be plenty of Democrats ready to fall in line.

No matter what, McCain is highly beatable. It's just that Obama would bring more fellow Dems to his inauguration than would Clinton.

It's far from over, and what will be will be. I am not emotionally invested in Obama, I'd have liked to have seen Clinton cash it in but I'd like to see a socialist paradise, too. Good luck to me!