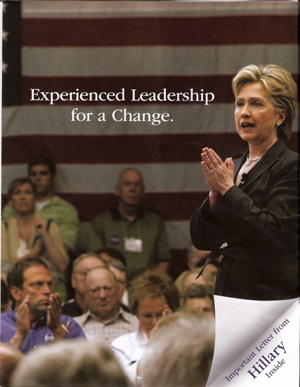 How many campaign slogans has Hillary Clinton used during her run for the 2008 Democratic Presidential bid?

I can recall several, including:

"Ready For Change- Ready to Lead"

"Experienced Leadership for a Change"

"Ready on Day One"

"Renewing the Promise of America"

And if she survives today's primaries, her campaign has several new mottoes ready to roll out, including...

"Nobody's Ever Suggested She's a Muslim"

"A Slogan For Every Supporter"

"Vote For Hillary Because Likability is a Liability"

"Live From New York's Senator, It Is Tuesday Night Alibis!"

Join the fun --add to these lists in the comments section.