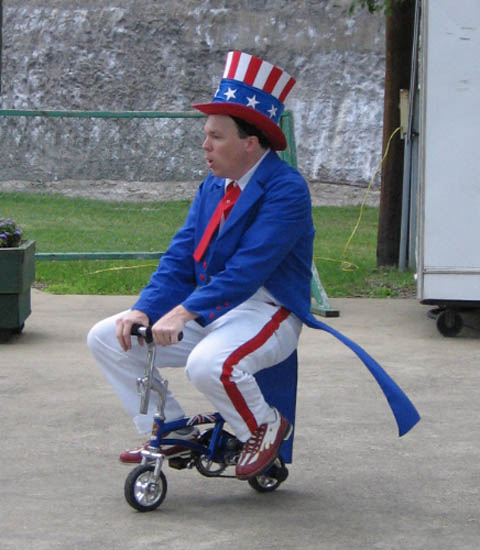 It's now mandatory for presidential candidates to demonstrate magnanimity in every speech by including a "humbling experience" about a brush with some "  regular American" on a "fixed income" who reminds the candidate "what this campaign is all about." Such references must also be made during all presidential addresses.

Here is a fairly typical example:

After the candidate thanks every elected official in three states, they then prattle on about their own unique qualifications, excessive accomplishments and unusual level of common decency. Suddenly their voice drops in faux solemnity as they say, "It is such an honor to get a chance to meet so many wonderful people in this great land of ours. Your stories and lives mean everything to me. Some nights, when I'm a tad worn out from campaigning and I begin to feel just a little sorry for myself, I remember who I am really out here for and I am humbled.

"Why just last week Eugene Tabley, a 79 year-old man from Lakewood, Ohio, came up to me and pressed $9.87 into my hand. Eugene told me he's on a fixed income, getting by on Social Security because he's unable to work. You see, Eugene lost all control of his bowels and bladder in a freak spelunking accident that occurred when he was leading an expedition of underprivileged children on their first visit to a cave. But he didn't want to tell me about his troubles, he just wanted to do whatever he could to help my campaign. Because Eugene loves this country! And so Mr. Tabley gave me the money he usually spends on adult diapers and then... and I promised myself I wouldn't get choked up,  he apologized that it wasn't more. Oh sure, this selfless American's crumpled bills and damp change smelled pretty gamy, just like Eugene himself... but that wasn't the only reason my eyes teared up. I was so moved by his generosity and story that I had one of my top staffers hug Eugene for me. And if you're out there Eugene, I want you to know that your money has helped me raise millions of dollars -- I had my staff put it in a ziplock bag and any time our fundraisers fail to meet their quotas, I have them open that bag, inhale deeply and remember just how much you sacrificed for us, my friend. And then they get back to work with just the kind of determination that Eugene Tabley demonstrated that day he squished up to me with his $9.87.

"So I can't quit on Eugene, any more than I can quit on America. Because most politicians defecate on their supporters but Eugene Tabley from Lakewood, Ohio took it upon himself to save me that effort so that I could work harder to win this election. I won't let you down, Eugene!"