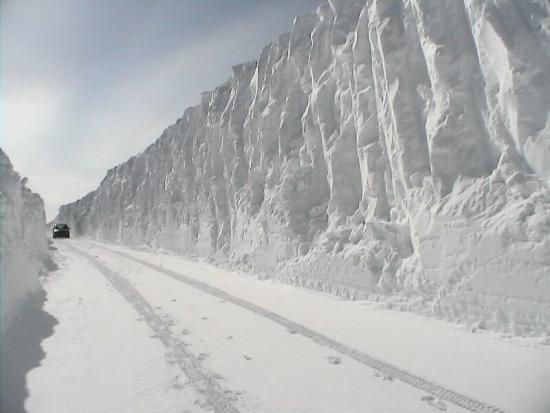 Today's the day!  It's the 24 hours we must pay to make up for trying to sneak out of the last four years several collective instants sooner. Best of all, it comes at the end of the "F" month at the end of the "W" season, not to mention the "W" presidency. Speaking of which, today is the calendric version of the taunt "bring it on!"

Today is an extra toll booth that comes when you already thought you'd gotten off the highway. It doesn't really make home any further away, it just makes you view it through the wrong end of the telescope. I don't know about how your seasonal trudge has gone, but around here Old Man Winter  been uniquely miserable. He arrived days before Thanksgiving and was fairly welcome through the holidays. We put him on the porch in early January and there he's loomed ever since.

Rather than simply dump copious amounts of snow, that at least serves as protective padding, Winter .07.08 has specialized in ice. Except for a very brief January thaw, we've been laminated in treacherous frozen stuff since December. This presents a challenge that can't be beaten with just a good attitude and a pair of snowshoes. Ice is a prohibitive substance. It makes you think twice about everything. "Should I really go up the driveway, just to get the mail?" The answer is "no." When you do go out, the shortest distance between you and the emergency room is traversed most quickly by trying to walk in a straight line. Careful zig-zagging is the way to go until the weather furnishes another heaping of snow that in turn provides at least some footing.

Eventually you give up and stay inside where, because you're a latter day intellectual, you read news from the net while you watch television. Massive exposure to conventional wisdom leads to a virulent cynicism that can only be remedied by warm breezes and blooming flower beds. Out of deference to T.S. Elliot and April, you put aside February's cruelty and instead consider its sarcasm, particularly when it comes replete with an extra day. So today, this extra day of this crummy month is as welcome as:

Another Clinton alibi or allegation

Mike Huckabee strapping on a bass to carve up Proud Mary with the Armadildos, the Holiday Inn house band in Uncle Larry, Tx

Yet another airing of the merciless "free credit report" pirate jingle

Anyone expressing obligatory and equally disingenuous devotion to "our troops."

The final chapter of HBO's The Wire -- a program that has consistently indicted hierarchies by reminding us that the fish always rots from the head.

Wolf Blitzer replaying his interview on the Lou Dobbs' show.

A forced march through Youngstown, Ohio

Any asshole celebrating the United States by telling us that elections are "uniquely American."

Footage of a celebrity in a body bag.

Breathless CNN reports accompanying actual footage of a dispute on a school bus.

Ali Velshi in a cowboy hat

Keith Olberman proving for the three billionth time that Bill O'Reilly is in fact a dick. We fucking get it, Keith. Move along.

Or for that matter, the entire liberal blogosphere responding to the latest intentionally inflammatory stunt or statement by some reactionary troll. Talk about right-wing echo chambers!

In other words, February 29, 2008 is about as welcome as Dick Cheney at a baptism.

You get it so I'll move along.... very carefully.