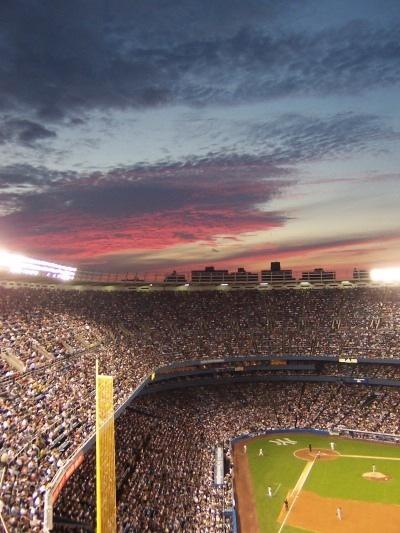 Everybody's a winner at the old ballpark!

This one is for the baseball fans and people who have to deal with them.

Recently a friend was amazed by my ability to instantly compute "games ahead" or "games behind" for any team. At the moment the Red Sox record is 76 wins and 50 losses. The Yankees are 70 and 55. I know right away the Yanks trail the Bosox by 5.5 games. How do I know this? Easily, that's how, and you can, too!

No one ever taught me how to do do this simple ciphering, I just figured it out on my own. That said, I assume others use the same method, which is infallible.

Once you learn it, you can amaze friends and flummox detractors, all because you had the good sense to come to barrycrimmins.com, your full service website! Of course if you don't give them the formula after you show off then you'll have violated the karmic tenants of this open source baseball solution... and your team will fall in the standings.

You've been warned so here goes...

All you have to do after arriving at this figure is divide it by 2 (this is because each win and loss in the standings is worth .5 games) Because 24 divided by 2 is 12, Team A leads Team B by 12 games.

Got it? OK, it will never fail you. It doesn't matter if one team has played more games than another, all that matters is where each team is in relation to the break even (.500) mark. Once you grasp this, you can figure out the standings in mere seconds.

One final example using actual standings
Last year's AL East final standings the Yanks finished 32 over .500, the Blue jays finished 12 over. 32 minus 12 is 20. 20 divided by by 2 is 10. The Yanks finished 10 games ahead of the Jays. The Red Sox finished 10 over. 32 minus 10 is 22. 22 divided by two is 11 and whaddya know! The Sox finished 11 out. Try Baltimore and Tampa bay yourself. Then try any team in relation to any other team. You will never be wrong. It's simple, it's obvious but I can't believe how many times people have thought I was pulling some sort of carny scam when I've employed this simple formula.

Finally, I apologize to those of you who already know this. I'm only sharing my little trick as a service to an awful lot of people who are confused because they think baseball standings can only be divined by mystic statisticians.

If this seems like it served as a benefit to others, I may move on to the sorcery involved in the riddle wrapped in an enigma that is the magic number.