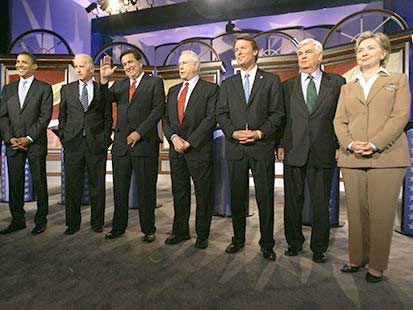 I don't know when it became a sign of political astuteness to concede in advance that it is futile to support a presidential candidate who best represents the hopes, aspirations and views of what may well be a plurality of the American people but it certainly is an impediment to Dennis Kucinich's bid for the 2008 Democratic presidential nomination.

Viewers of last Sunday's Democratic debate said Kucinich carried the day and said so in an online poll. Apparently this embarrassed ABC. It responded by posting a picture of the debate's participants that did not include Kucinich. The Ohio congressman was obviouslycropped out. ABC then went on to rephrase its polling question, only to move it out of prominent placement on its website when Kucinich again walked away with the vote. In the debate itself, moderator George Stephanopoulos didn't even direct a question to Kucinich until 28 minutes into the proceedings.  Thus far ABC hasn't felt an obligation to respond to obvious and important questions leveled at it by the Kucinich campaign. Much like the Bush Adminitration, it feels its above having to answer questions from a mere legislator.

Self-styled political pragmatists take their cues from mainstream media pundits who repeatedly label Kucinich as 'fringe' and 'far left' for holding views that would be considered fairly mainstream in democracies all over the world. When polled, Americans favor getting out of Iraq; universal single-payer healthcare; immediate steps to deal with the global warming crisis; helping the downtrodden; improved public education; more corporate legal and fiscal accountability; the unequivocal separation of church and state; an immediate end to the assault on domestic civil liberties; rebuilding the infrastructure; a pragmatic, forward-thinking  energy policy; serious campaign finance reform; reclaiming the public airwaves from private goliaths; a sober reappraisal of our food supply; withdrawal from trade agreements that create one world for capital while imprisoning more and more workers in third and even fourth worlds and any number of other views Dennis Kucinich champions. So why allow people to tell us that we are naive if we believe such views could ever be held by the president? Why give up and choose one of the three hedge-funded frontrunners in the Democratic chase? (Clinton, Obama and Edwards all garner major support from these secret clubs of tax-evading millionaires.)

Before we go through another debacle similar to 2000, understand in advance I'm going to support candidates who hold views and ideals similar to my own. I am not going to be scared into voting for a cynical, calculating, ethical lightweight like Hillary Clinton so don't ask. Leave fear to the Republicans, they're so much better at it.

I'm a Kucinich man. Anyone who tells me I can't afford the luxury of supporting the sane choice is far more naive than I'll ever be.