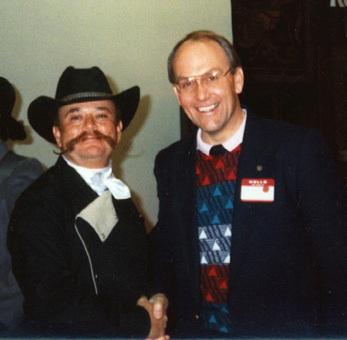 So do you figure Larry Craig will go on a campaign to get the government out of our men's rooms?

Perhaps he'll get on his knees and beg.

Oh wait, that's what got him in trouble in the first place.

In keeping with his beliefs, Craig now hates himself.

It would be hypocritical for him to do otherwise.

Maybe he can go to a Christian camp where they'll cure him of being a senator.

The Republican Party used to be the hip underground place for gays to hook-up but everyone knows about it now.

Craig claims he was accidentally playing footsie with an undercover cop in the next men's room stall because he has a "wide stance."

A stance as wide as Idaho itself!

He'll have tough shoes to fill...because they're so wide apart.

Craig showed Minneapolis airport police his Senate business card and asked them: "What do you think about that?"

We think you're probably going to be needing a new business card, Larry.

Craig also said he wasn't reaching under the stall divider to signal he wanted sex from the undercover officer, he was just picking up a piece of paper on the floor. And who among us can say they have never reached into an occupied men's room stall to pick up some paper on the floor?

Let me guess, Larry, you clean up paper in the next stall because you don't want to step on it during your wide stance.

This is the first known case of Larry suggesting he's ever done anything for the environment.

Gosh you'd think an undercover cop would appreciate a guy who polices men's room stalls on his own.

What do the I-35 Bridge and Larry Craig have in common?

Do I really have to answer? OK, OK. They both went down in Minneapolis.