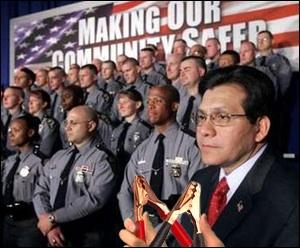 Things were never safer for storm troopers than during Gonzo's reign

He also said Gonzales's "good name has been dragged through the mud for political reasons."

Well that's the first time the word 'reason' has been used in regard to Alberto Gonzales.

His name wasn't dragged through the mud, he rolled it through it.

Contact the EPA, we need a toxic mud cleanup.


Attorney General Alberto "Seedy" Gonzales is resigning. The only surprise is how long he lasted. Bush may have thought it was a good idea to have a criminal run the Department of Justice but most Americans knew the experiment had failed long ago.

Seedy's successor will have an easier task in front of him or her than Gonzales faced. There are so many fewer civil liberties for an AG to defend these days.

Fatherland chief Herr Michael Chertoff is rumored to be his replacement. And who better than Captain Katrina to take charge of the Hurricane Alberto cleanup operation?

So what if he failed to realize that the key syllable in "homeland security" was 'land?'

Gonzales will return to private practice, in all likelihood criminal law. But I repeat myself.

The big question is: when Gonzales announces his resignation, how will we know if he's telling the truth or not?

A few weeks from now he might issue a terse denial.

Gonzales's prospects would be brighter if there weren't so many damned former federal prosecutors around to scoop up all the good cases.

Seedy isn't so much retiring as he is participating in a high end work release program.

Poor Dubyahoo --stuck in that haunted mansion with no one to protect him from that mean old Dick Cheney.

Seedy will stay busy in his spare time, making sure all of W's boots are waiting freshly licked in his Crawford closet.